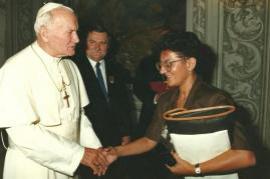 On the anniversary of Karol Wojtyła's birth, on 18 May, a few days after the ratification of his beatification process, we present an analysis of his role in the struggle for dignity and freedom in the communist regimes.
Our contributor Annalia Guglielmi gathered the memories and assessments of the prominent Solidarity leaders and added her direct testimony of Wojtyła whom she met in Poland before he became the Pope, while she worled in the editorial board of the magazine of the Centro Studi per l'Europa Orientale, which spread the works censored by the communist regimes in the West.

Historian Bronislaw Geremek, one of the most important post-war intellectuals from Poland, said "the communists had been under the illusion that the young priest who had become an auxiliary bishop would be more open than other clergymen to the authorities' requests. Actually later on they became more and more hostile towards that bishop who then became Cracow's Archbishop and someone even told me that he was at risk of a worse treatment than the one received by cardinal Wyszyński. In the circles of democratic opposition Wojtyła was very popular for what he said and what he wrote".

Former Polish President Mr. Kwasniewski remembers that for the first time the papal election in 1978 caused a delay in news broadcasting in Poland. "The speaker was confused. Leaders in the Soviet bloc realized a thing had happened which would have deep consequences. If someone in the East downsized the events it was surely out of hope that Wojtyła would be an old style Pope and would not introduce any novelty. They didn't expect him to be so popular, to hold such important pilgrimages, to be very proactive in mass-medias and to be so straightforward in talking about politics".

Journalist and Solidarity member Kontanty Gebert remembered an episode which in Ms. Guglielmi's opinion is very significant. "A huge Mass was expected to take place in a giant stadium in Warsaw and the access road to it was in front of the building of the Communist Party's Central Committee. The ceremony would take place in the afternoon, but since the early morning a huge wave of people started passing by the Committee to reach the stadium. One million people shouted: "We forgive you! We forgive you!". Imagine those people in the Committee, behind the tanks and soldiers with submachine guns, listening to these words: "We forgive you!". It was like a radical reversal of the situation, as if the crowd said: "We are Poland, and you with all your stuff and power apparatus don't represent us. We have the right to judge you and we are so sure about our righteousness that we entitle ourselves to judge you".

Lech Wałȩsa himself, who was then under surveillance, recalled his meeting with Wojtyła: ”Our meeting in the Chocholowska valley in the Tatra mountains was of the utmost importance. It reminded the people that Wałȩsa was alive, the Solidarity trade union still existed. I wonder what would have been the outcome of change in Poland without that meeting. The encounter also reminded the people that it was inevitable to fight for a different Poland. The Holy Father was of great help to reach the solution to the problems. The encounter was important in itself. For me it was essential to see that we were following the same path, that there were no clashes, that we were always united by the same ideals, that the things we believed in were still alive. At the time we could not speak a lot. We both knew we were watched, and every uncautious word could have serious consequences. We were aware of the conditions under which we were meeting. As I have already said, the most important thing was the very fact that we were meeting”.

Our contributor Annalia Guglielmi recalls: "We had met cardinal Wojtyła in Cracow at the beginning of the Seventies. The group of CSEO contributors had woven a lot of relationships with the intellectuals of the Club of the Catholic Intellighencja (KIK) [...] who had created several magazines "whose most significant articles we translated and published in our monthly, CSEO documentazione. They were official publications, therefore they underwent censorship, nevertheless they were the only independent source on the gray stage of the official press, and they often published contribution by intellectuals who were even very far from the Church. The open and pluralist line stemmed from the relationship with the cardinal, who in many cases was an old friends of the editors, and who himself published essays or articles, or even poems, under the pseudonym Andrzej Jawien.
It was right these editors who introduced us to him, and our initial contacts soon turned into deep friendship and esteem, which above all father Francesco Ricci, the founder of CSEO, kept alive also with the Pope. [...] In Wojtyła the defense of the Church's rights combined with a reckless defense of the rights also of non-believers, to whom he opened the church's doors when they organized hunger strikes or protests, whose contributions he published in the magazines and whom he often defended by stepping in with the authorities and this is why his criticism towards the regime, his struggle against the party organs which was sometimes harsh and sharp, was never ideologically motivated, but always stemmed from an authentic interest in the human beings he dealt with".