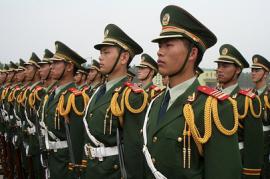 One Spring evening, during the second month of occupation of Tiananmen Square, the Chinese political class was in a state of extreme agitation for the urge to stop the unrest. The army top officials were summoned to decide the use of force against demonstrators.

25 years on, we are aware that one of them defied these instructions bravely. He was General Xu Qinxian, who ran the prestigious 38th army. He said the student movement was a political movement and it had to be adressed through negotiations. The General, who was jailed for 4 years and stripped off his grades, according to US daily The New York Times would have said to historian Yang Jinsheng: "I had rather be hung than be a criminal before history".

This defiance act emerged from a series of documents that dissidents have managed to smuggled outside China over the past decades. As opposite to what was though earlier, these file do not reveal the existence of opposed factions within the army, but rather the fear of the Beijing top leaders that the protest would also gain support of the militaries. This is why the elder members of the Communist Party of China pushed heavily for bloodshed.

Some of the documents available on the massacre of 4 June 1989, like the "Tiananmen Papers", are currently questioned as to their authenticity. Nonetheless we know the militaries who were ready to take on the responsibility for shooting at the civilians were only a few. The instructions given to the troops sent to Bejjing was very vague. Documents contain hints about the possible existence of a petition from within the army to demand the withdrawal of the troops.

Another dissident military, Col. Wang Dong, drafted a petition against martial law. Always according to the New York Times, now that Wang is dead, people are making some shy attempt to talk about that petition. Colonel Wang even had meetings with some liberal intellectuals, who overtly criticized the student movement for its "naiveté", but secretly worked to try and prevent from the massacre. Wang though during these underground meetings understated the risk of a bloodshed, because, he said: "If the Communist Party shoots at civilians, it will be a suicide". For many people, the outcome of the confrontation between the protesters and the Party was not at all clear.

The number of the dead was never counted accurately. They could be a hundred or a thousand people. According to the government the victims were 300. The day of the massacres there were bullet holes all over the place. But above all there was a graffiti with the writing: "It's the people's blood! The people's blood!".