The children of the genocide 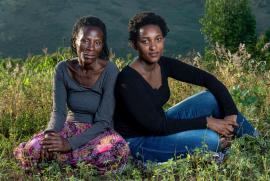 25 years have passes since, on the night between April 6 and 7, 1994, the genocide of the Tutsis and moderate Hutus began in Rwanda, at the hands of the regular army and the Interahahmwe - paramilitary militias. It lasted 100 days and killed about a million people. The genocide left a great impact on Rwanda’s society and the consequences of the atrocities continue in the present: the "society of survivors" coexists with that of the perpetrators, the neighbor may be the murderer of someone from your own family or your rapist. Many of those who have suffered violence find the strength to go on through the path of reconciliation and forgiveness, clashing with the repercussions of their physical and psychological wounds on everyday life.

One of the most profound consequences that genocide has left in Rwanda is that of the difficulty of integration and the psychological trauma that the so-called “children of the killers” experience. These are thousands of children born from the rapes used as a weapon of war during the days of the massacres, crimes not only aimed at destroying the person who suffered them and his family, but who also "condemned" the life of the new born, seen as the result of that violence. Today, these children are adults, some more aware of what happen to their mothers and others less. Everyone shares the difficulties of belonging to a society that often condemns them to discrimination due to the label that was assigned to them, that of "possible criminals". Some of their stories, told by photojournalist Jonathan Torgovnik, were published on March 30th in the New York Times. Torgovnik said: "Revisiting the families I met 12 years ago, when I started documenting the realities of women raped in 1994 and of their children, I found challenging stories of hope and forgiveness. But I also found fragility and lingering trauma, among mothers and children alike".

Here are some of those testimonies, words of those who have experienced evil and who have known a truth that is difficult to accept.

Bernadette, Faustin's mother, has made progress compared to the first time Torgovnik had met her in 2007. Now she has decided to forgive her abuser because, at least, she says, she let her live when she could have killed her. Her trauma resurfaces, however, when she realizes that, although she wanted to start a new page in her life, finding the courage to look ahead, those around her do not show the same will and continue to consider Faustin only the son of a murderer.

Justine found the courage to tell Alice that she is a daughter of the genocide, but she cannot know which of the many men who raped her is her father. For Alice it was not easy to find out that she is the daughter of a person who did such horrible things, but the future awaits her, she has just completed her secondary education and enrolled in university. "My Life has improved and is still getting better. Now I feel free", she says. Also Justine feels a similar sentiment, she feels that her relationship with her daughter has improved because before she struggled to love her while now, who has told everything, she feels closer to her.

Claude, while feeling profoundly ashamed of his father who he discovered to be a murder, he finds his courage in being a young man who will not be defined by the way he was born but by the fact that he will be able to build a good future for himself and be a responsible person. He wanted to meet his father because he felt the need to ask him why he had done all those terrible things. Unfortunately, his father died before he could meet him. Claude's mother, Stella, thinks rape was the greatest weapon during the genocide in Rwanda because, she says, "the people that were killed died, but us that were raped, we live with the consequences, and then we pass those consequences to the next generation.”

Recently, this terrible reality has been discussed a lot, following the awarding of the 2018 Nobel Peace Prize to the Congolese doctor Denis Mukwege and the witness of the Yazidi genocide Nadia Murad "for their efforts to end the use of sexual violence as a weapon in wars and armed conflicts". Increasing knowledge on these issues is fundamental for building a new awareness on the violence that continues to occur in different countries of the world. The stories of the children of Rwanda's genocide show a way to react, but also how much work still needs to be done to shed light on the issue and intervene internationally.