The Amnesia of the Memory

Two years of silence in Syria 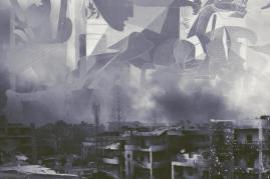 Two years after the outbreak of violence in Syria, the death toll continues to grow.
According to the United Nations, there are more than three million Syrian refugees in their own country, and almost as many in neighboring countries and in North Africa.

Amnesty International denounced the indiscriminate bombing of civilians, torture and enforced disappearances of prisoners and the violence of the armed opposition groups. The first to suffer the consequences are the children, who are struggling to find food and often live in barns, parks and caves, with no restrooms nor schools.

Below is the letter by Shady Hamadi, Syrian writer and activist, on the importance of memory of what happened - and what is still happening - in the country.

On 15 March 2011 in Dar'a, a town in the valley of Horan, revolution broke out in Syria. It has been two years, 80 000 deaths, a million and a half refugees in neighboring countries, four million people displaced within the country, and we are still here: our lives continue, unperturbed. This is a letter, different from other ones, dear friends, I have addressed to you in the past. Gariwo, the forest of the Righteous works to keep the memory alive, to give space to the stories of the Righteous and remember them.

But what is the memory today? The memory should give us the tools to understand the current events, as well as to prevent the recurrence of evil. The memory is expected to prevent events that could cause drama. The memory is to remember the others and worry about them. Yet we constantly forget to remember. How many times we find ourselves celebrating the memorial days and then go home and the next day everything runs the same, without having understood the real meaning of these celebrations. The memory must be a practical exercise and part everyday life, to recognize the evil in all its forms and learn not to be indifferent, but ready to fight.

Syria, like many other countries torn, by human evil, is the testing ground for this spiritual practice that too many of us have forgotten, being overtaken by amnesia. We think of being at peace with our conscience, of having done our duty while gathered and having a minute of silence to commemorate the deaths of seventy years ago, believing that today similar murders are not being committed, but that is not true. In every four minutes one Syrian dies. The craters of Scud missiles, the bombing, the mass graves and mutilated children, in the name of God - President Bashar al-Assad - demonstrate our amnesia and guilt.

One day, not too late, the History will scream a single question: "Why the world, why the civil society and ordinary citizens have been quietly watching, with indifference to the destruction of the Syrian flesh". Why? This is the real question.