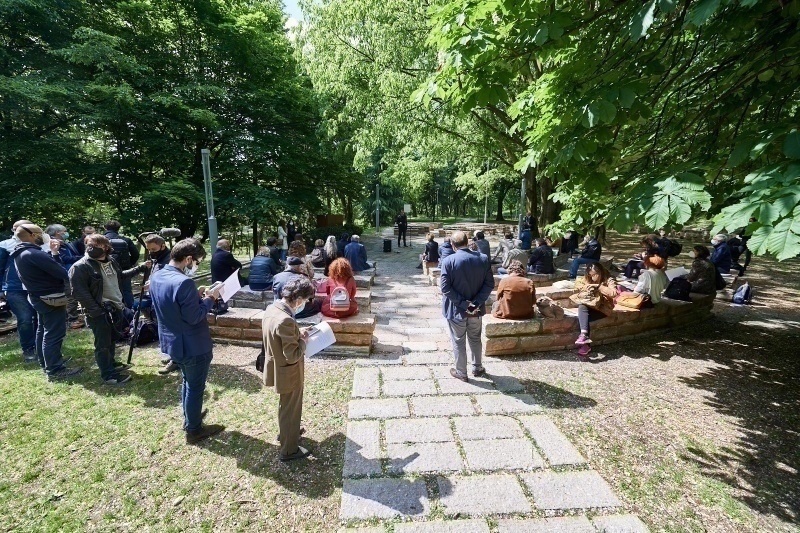 On the occasion of 2021 World Press Freedom Day, themed "Information as a Public Good", Gariwo organized a guided tour of Milan's Garden of the Righteous Worldwide with journalists and editors in chief of the main Italian newspapers and media outlets, as well as the representatives of the foreign press in Italy.

The World Press Freedom Day has its origin in the historic Declaration of Windhoek, a benchmark for freedom, pluralism, and independence in the press. The Windhoek Declaration was signed exactly 30 years ago, on May 3, 1991, in Windhoek, Namibia, following a UNESCO seminar on press freedom in Africa. In 1993, the UN General Assembly proclaimed May 3 the World Press Freedom Day. This day is an opportunity to remind governments of their duty to ensure press freedom, to celebrate its fundamental principles, defend independent media, assess the state of press freedom around the world, and pay tribute to journalists who have lost their lives in the line of duty.

A day like this touches Gariwo to its core: freedom of expression, especially in its ceaseless interplay with censorship and repression, is central to Gariwo's mission. Since 1999, we have been working to spread a message of individual responsibility and encourage the dissemination of the memory of the Righteous – of those who choose the Good in challenging and difficult circumstances –, endeavoring to transform it into a universally recognized value. To this end, Gariwo created a widespread and widely participated network of more than 130 Gardens – symbolic places for remembrance of morally resistant exemplary individuals from all parts of the Earth – in Europe, North Africa, and the Middle East.

We believe the World Press Freedom Day is also a "day of remembrance" for journalists who have lost their lives as a result of their work. Last week, Spanish journalists David Beriain and Robert Fraile were killed, together with conservationist Rory Young, while working on a documentary on Burkina Faso's anti-poaching operations. Since the beginning of 2021, 8 journalists and media workers have lost their lives while at work. 50 did in 2020. All this shows the extent to which press freedom is endangered to this day. For this reason, we decided to celebrate World Press Freedom Day through a guided tour of Milan's Garden of the Righteous Worldwide, where we honour the figures of five Righteous of the Information. That is, of journalists who lost their lives to report reality on reality, in full accordance with article 19 of the Universal Declaration of Human Rights: "Everyone has the right to freedom of opinion and expression; this right includes freedom to hold opinions without interference and to seek, receive and impart information and ideas through any media and regardless of frontiers".

In Milan's Garden of the Righteous Worldwide, Gariwo honours the following Righteous of the Information: Liu Xiaobo, a Peace Nobel Prize winner and the author of Charter 08, a manifesto for political democracy in China, who was sentenced and imprisoned; Raif Badawi, the Saudi blogger who was sentenced to 1000 lashes in 2014 for having defended the dialogue between different faiths, ideas, and cultures; Samir Kassir, the Lebanese journalist killed for his defense of freedom of speech, human rights, and national sovereignty; Hrant Dink, killed in Instanbul for his defense of the memory of the Armenian genocide in Turkey; Anna Politkovskaja, killed in Moscow for her denunciation of the civil massacres in Chechnya.

By sharing their stories with the guests who joined us today, we wanted to show our support to those who commit themselves every day to the difficult task of informing, despite the great difficulties that the pandemic has brought in the past year. The tour took place between 11 am and 1 pm and became the occasion to exchange views on the link between journalism and democracy and the fragile and essential nature of press freedom in our times.

Lamberto Bertolè, president of Milan's City Council and President of the Guarantors' Committee of the Association for the Garden of the Righteous in Milan, started today’s opening remarks by giving a warm welcome to those present and stressing the importance of the Garden as a place of remembrance and of reflection on our times. "Celebrating the role of journalists in our democracies", Bertolè said, "is something of the utmost importance for young people today". Gabriele Nissim, President of Gariwo Foundation, followed: in an appeal to all journalists, Gabriele Nissim remembered the figures of Armin Wegner, the German soldier, medic, and photographer who denounced the Armenian genocide through his photographs, and of Jan Karski, the Polish fighter who sought to mobilize the world against the Shoah. "Today", President Nissim said, "the courageous journalists who expose the ethnic cleansing of the Rohingya, the cultural genocide of the Uighurs, the mass atrocities in Syria and Yemen, the political persecution in Russia, China, and Turkey have taken on their shoulders [Wegner and Karski's] moral legacy and it is through their work that a worldwide mobilization can be achieved for the prevention of any new form of extreme evil".

Alessandro Galimberti, president of the Ordine dei Giornalisti della Lombardia, described the work of journalists as a mission of truth, often leading to solitude, where one has to report things are they are, independently of personal convictions and, often, of personal relationships. Tatjana Dordjevic, Chairman of the Milan Foreign Press Association, under the patronage of which the event took place, concluded the greetings. "We must never be silent, even in the most difficult moments", Dordjevic said, "those moments when we have to investigate, when we have to tell the truth, when we should oppose any pressure from those who hold power”. Dordjevic also remembered the 21 journalists who were kidnapped, who disappeared, or who were killed during and after the war in the Balkans, especially the war in Kosovo, from 1998 to 2005, stressing that no justice has been made for them.

The guided tour of Milan's Garden of the Righteous Worldwide started on the plaque dedicated to Liu Xiaobo, where we read a message that Liu Xia, Liu Xiaobo's wife, sent to Gariwo on the occasion of today's celebration: "I want to thank Gariwo", Liu Xia writes, "for conferring this special honor on Liu Xiaobo and me. At a time when democracy and freedom are being challenged around the globe, what you have done is invaluable, reminding people to fight and cherish our hard-earned freedom." Some of the guests were then invited to lead the commemoration of the five Righteous of the Information honoured in Milan's Garden.

Paolo Pobbiati, former President of Amnesty International Italy, which organized the liberation campaigns for both Liu Xiaobo and Raif Badawi, paid tribute to these two figures, commenting on their stories and on their courage; the tour continued on the plaques dedicated to Samir Kassir and to Hrant Dink, respectively commemorated by Antonio Ferrari, columnist of the Italian newspaper Il Corriere della Sera, and Pietro Kuciukian, Honorary Consul of the Republic of Armenia in Italy. Finally, the journalist Anna Zafesova paid tribute to the Russian journalist Anna Politkovskaja.

The guided tour became the occasion to reflect on the present, and on the living contexts where press freedom is seriously endangered. Whilst Antonio Ferrari recalled the killing of Saudi journalist Jamal Khashoggi at the Saudi Consulate in Istanbul, Anna Zafesova mentioned the raid of the Russian magazine Doxa and the fight for survival of independent Russian news website Meduza, which the Russian government declared "foreign agent". "In today's Russia,", Zafesova also said, "hundreds of journalists run the risk of being killed: Anna Politkovskaja was the first, great victim of an ongoing regime".

Gariwo passionately believes that courageous and intellectually honest information lays the foundations for conscious and mindful citizenship, one that is able to detect the signs of democracy's degeneration and consequently prevent it. Today, World Press Freedom Day, it has been the occasion to celebrate this belief with its very protagonists.