Is genocide taking place in Afghanistan? 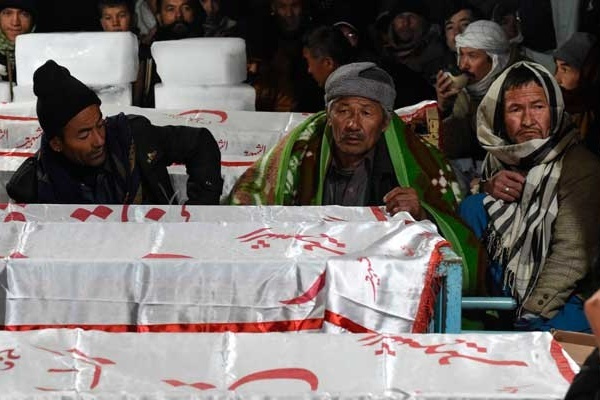 Following the second Anglo-Afghan war, Abdur Rahman Khan was appointed to be the new emir of Afghanistan in 1880. The English wanted a strong central government for Afghanistan that could act as a buffer state between India and the Russian Empire. Thus, the emir undertook to suppress local uprisings in the country and in particular the one that took place in Hazarajat from 1888 to 1893. Hazaras - a predominantly Shia ethnic group that spoke Persian - were subjected to state-sponsored ethnic cleansing. Apparently, over 60% of the population was decimated; millions of Hazaras were killed and many more were forced to flee or were captured and then sold as slaves. Their lands, possessions and women were distributed among Pashtun nomads and other tribal groups who helped Abdur Rahman Khan crush Hazara resistance.

Since then and to this day, Hazaras have always been persecuted in Afghanistan. So much so that for many of them one can speak of genocide. After all, there have been massacres heading in that direction in the history of Afghanistan. For example, the extermination of Mazar-i-Sharif in August 1998, when thousands of Hazaras (according to some, twenty thousand) were brutally murdered by the Taliban.

“The Taliban also killed Hazaras’ animals”, journalist Basir Ahang has explained. “They said they were as dirty as they were”.

From the collection of testimonies to the recognition of the genocide

The aim of the meeting, which involved Hazara activists and writers as well as academics specializing in genocide, went beyond mere historiographic reflection. The urgency of the present, involving several cases of massacres against Hazaras that have been perpetuated in recent months in the deafening silence of the Western media, means that the involvement of the international community can no longer be postponed. The organisers of the conference explained that they intended to start a broad reflection leading to the possible genocide of Hazaras being tried by the International Criminal Court.

On 5th March 2020, the Appeals Chamber of the International Criminal Court unanimously decided to authorise the Prosecutor to initiate an investigation into alleged crimes within the jurisdiction of the Court in connection with the situation in the Islamic Republic of Afghanistan, after a long and tortuous legal process. Investigation criteria, however, only apply to what has happened in the Afghan territory and other territories connected to the armed conflict in Afghanistan since 1st July 2002. However, the decision was made to investigate into war crimes and crimes against humanity. Not genocide.

Why then should one speak of genocide? Claudio Concas, an expert on the Hazara issue, retraced the crucial moments in Hazara history from the massacres of 1890-1893 to the present day and then gave the floor to the representatives of the Hazara diaspora who are advancing the demands of their people.

Like director Amin Wahidi, already interviewed by Gariwo, who began his speech by quoting an ancient Hazara poem, which reads: “When I eat a pomegranate from Kandahar I can taste the blood of ancestors”.

Wahidi criticises international media’s approach to the Taliban narrative, which tends to view Afghanistan as a multicultural fabric at the mercy of a fundamentalist minority. “We are not in the multi-ethnic picture portrayed by international media”, he explains, adding that out of the 14 ethnic groups defined by the old constitution, Hazaras are the most persecuted one, forced to seek refuge in the most inaccessible parts of the country. “The geography of Hazaras is linked to protecting themselves from evil, which is why they choose the mountains. And even there, they are not exempt from discrimination”. As it happened in 2016, when the then President Ashraf Ghani decided to change the project that would bring electricity to the central highlands of the country, actually leaving hundreds of Hazara villages isolated. Thousands of Hazaras took to the streets, the government reacted by blocking the roads with containers and eventually the Islamic State attacked protesters, killing about one hundred people.

However, the issue goes much deeper. Not recognising the rights of Hazaras means, for example, ignoring the fact that all women’s demonstrations that have been carried out in the last few months involved Hazara women. The Taliban, Wahidi explains, are afraid of educated women because they “do not submit to tribal law”. “Not forgetting Afghanistan” therefore “means not forgetting Afghan women and other ethnicities besides the dominant Pashto one”.

However, is there room to call what is happening to Hazaras genocide? Journalist Basir Ahang believes there is. Starting from documents, Ahang explained that Hazara slaves were sold as far as Calcutta and that based on the analysis of terms used in 1949 Convention, it is clear that one can speak of genocide. Furthermore, Ahang explained, the genocidal project has continued to this day: “Hazaras are marginalised by society and receive systematic discrimination. A report by the US Department of Foreign Affairs stated in 2017 that discrimination against Hazaras was systematic, that their presence in the government was symbolic and that Hazara soldiers were sent to areas where there was a greater chance of being killed”.

What has changed with the advent of the Taliban? “We receive daily news of massacres and confiscations”, Ahang explains. “In the last nine months, more than a thousand Hazara civilians have been killed, thousands injured, 800 families have been forced to leave their homes” and in the last few months, “at least 27 attacks were perpetrated against Hazaras” in ghetto neighbourhoods in west Kabul, where Hazaras are relegated.

The collection of testimonies

In the West, some are trying to understand the details of massacres and whether they can be considered to be genocide or not. In the UK, an independent commission has been formed to provide the Parliament with a report on Hazaras’ human rights situation. Dr. May Homira Rezai is part of it. In addition to explaining the role of the commission and the development of the report, which will be released in July, she has reiterated that before the massacres in the Hazara community there was substantial equality between men and women. “Prior to internal colonisation and genocide, women in the Hazara society were considered to be equal to men, unveiled and considered as heretical by the Sunni majority, as it is reflected in the accounts written by Scottish cartographer John Wood”, Rezai explained.

“The persecution of Hazaras is directly linked to the values of the population: the Pashtun custom was that when invading Hazara villages, they would be allowed to own land, women and children. To this day, this concept persists”.

The commission is working by collecting written testimonies, by carrying out extensive archive work to map attacks and violence and by collecting oral information through dialogue.

In addition to poignant testimonies of the president of Najiba Foundation and Salima Mazari, the governor of Cahar Kint district until 15th August, two speeches - one academic and the other legal - explained the scientific-regulatory framework in which the debate on the genocide of Hazaras is placed.

Field research and the genocide thesis

Anthropologist Melissa Kerr Chiovenda, a professor at Zayed University, explained how her fieldwork in Afghanistan from 2009 to 2019, focusing on the collective trauma of the civil society, helped plead the genocide theory.

“Around 2012 and 2013, when I was in Bamiyan, significant attacks on Hazaras were rarer, yet minor attacks on travellers were common, as were attacks on Hazara communities in Pakistan”. Melissa Kerr Chiovenda tried to group the common symbolic elements of the various attacks, coming to the conclusion that attacks having intent attributable as “genocidal” have increased after 2013. “Especially since 2016. The list is very long but it is definitely worth mentioning attacks against schools, gynaecological hospitals and maternity wards”. The aim of attackers is allegedly to kill “Hazaras of the future”.

Yet scholars who have called the Hazaras’ a “genocide” in the past decades are not numerous. “Few people have considered speaking of genocide to be fair, they have rather considered it fitter to speak of persecution and targeted killings”.

Kerr Chiovenda has mentioned the Shia attack in Quetta, Pakistan, killing more than 100 people in 2013, and the hunger strike carried out by Hazara activists in Bamiyan to demand that Unama (the UN mission in Afghanistan) investigate the genocidal causes of the attacks.

1) The numbers of Hazaras killed at the hands of the Pashto seemed to be far different than those of other 20th century genocides.

2) The aim of attacks did not appear to be the extermination of the Hazara population.

The study of collective, intergenerational trauma, often entrusted to oral memory, has persuaded Kerr Chiovenda that Hazaras’ was a massacre falling within cases considered by Lemkin. “It is important to remember that although saving people in the present is the priority, we must not forget what happened in the past, which is after all the root of exclusion and violence in the present”.

According to Melissa Kerr Chiovenda, it is important not to give in on three main issues:

The role of the International Criminal Court

How is the ICC acting on the issue of Hazaras? According to several analysts, the Court’s action has so far been intangible. Silvana Arbia, who has been the Registrar of the International Criminal Court, explained the possible course and timing of proceedings. Previously, she was Acting Chief of Prosecutions at the prosecutor office of the International Criminal Tribunal for Rwanda, leading the prosecution in numerous genocide cases handled by the court.

“If it is genocide, it is an international duty to act, as 1949 Convention states”, Silvana Arbia explained. “Based on elements heard, it seems that the one in Afghanistan might not only be a ‘silenced genocide’, it may also be a ‘permanent and embarrassing genocide’ ”. Afghanistan has been part of the International Criminal Court since 2003, which means that conditions apply for the court to intervene.

Afghanistan is currently “under investigation”, but the course of the investigation is described by Arbia as “embarrassing”: such a delay is “hard to be accepted, since 2003 we have had to wait until 2017 to open investigations into Afghanistan”. The Pre-Trial Chamber had initially deemed the investigation to be unnecessary. Then, on 5th March 2020, the appeal chamber changed its decision and authorised the opening of investigations. “But only for crimes against humanity and war crimes and it is embarrassing that the prosecutor’s request is limited to those crimes”.

Why should a genocide investigation be opened? According to Arbia, the important step is the intent to destroy, in whole or in part, a national, ethnic, racial or religious group.

An underlying issue, which has meant that the possibility of genocide has never been taken into consideration, is that knowledge of the concept of genocide itself is lacking in Afghanistan. The section of the Court for the Victim Application Process gathered information from 699 victims. None of them mentioned genocide. Furthermore, very few women responded to the questionnaires, although female testimony has been crucial for rape convictions in genocide in the evaluation of genocides such as the Rwandan one.

Shortcomings are obvious. In Afghanistan the Court is seen as something distant and intangible and more intermediaries are needed.

The work of activists, Arbia explains, is pivotal. However, stories must be turned into evidence. We must work on the form, understand how to make it compatible with Afghan society.

Because the crucial issue, Arbia concludes, is that the concept of genocide and its prevention makes sense even today, in a globalised world. After all, the founding Charter of Rome still mentions peoples: destroying them means destroying a part of the mosaic of humanity. “The greatest threat is impunity”.