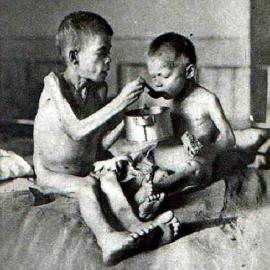 On 22 November in Kiev, after crossing 33 countries, the "flame of the eternal candle" joined the millions of candles lit in memory of those who starved to death in the Great Ukrainian Famine engineered by the Soviet regime between 1932 and 1933. On 29 November 2006, Ukraine officially instituted the fourth Saturday of November as Holodomor Remembrance Day. With a resolution taken on 23 October 2008 the European Parliament recognized the Holodomor as a crime against humanity.

Letter sent to us by the Consul General of Ukraine

In these days the Ukraine is commemorating the 75th anniversary of one of the most tragic chapters in its history – the Holodomor – the artificial famine planned by the Stalinist regime between 1932 and 1933.
Millions of people were exterminated without a single sign of their passing on this earth, with neither a name nor a tomb to testify to their memory.
The efforts that modern-day Ukraine is making to bring this tragic period in its history to the attention of the international community are linked to the need for the Holodomor to be recognized as a crime against humanity, a genocide.
International support is very important if we are to reinforce our faith in the renewal of historic justice and strengthen our resolve to obtain recognition for the historic truth.
Our intent is not to take revenge for the past, which can no longer be changed. Our aim is to restore the dignity and to honour the memory of millions of our countrymen who were deprived so cruelly of what is most precious – life itself. This is why we are committed to re-establishing the events of our past as they really happened. Our goal is full understanding of the Holodomor both within our own country and internationally, conscious as we are that, when the world favours amnesia and the falsification of history, it is condemned to repeat its very worst errors.

Tomorrow, 22 November, the journey taken by the symbolic “eternal candle” – a torch bearing the words the Ukraine remembers – the world recognizes, which has crossed over 33 countries in the world, including the city of Milan on 7 September last, will come to an end in the Ukraine. There, official ceremonies commemorating the 75th anniversary of the Ukrainian tragedy will be held to pay tribute to those who died as a result of the artificial famine, known as the Holodomor.