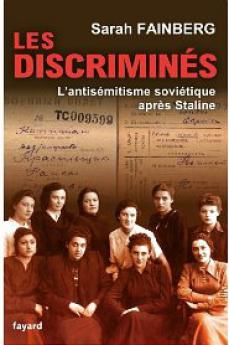 The cover of Fainberg's book (Amazon)

Israeli professor Fainberg explored how the USSR, which claimed to promote "friendship among the peoples", actually started out a policy of racial discrimination against the Jews, which were later crystallized in a kind of state-run racism.
Some minorities, like the Tatars and the Chechnyans, faced deportations, while others while others gained privileges and climbed up the ladder of the Soviet nomenklatura. The Jews had been theoretically favored by the early revolutionaries, but they fell into disgrace after World War II and they were persecuted until the collapse of the USSR in 1991.