Understanding genocide to prevent it

lessons by Bauer and Goldhagen 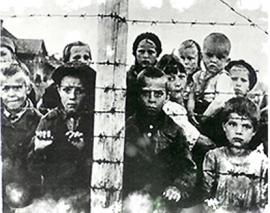 Children in the Holocaust concentration camp

Historians Yehuda Bauer and Daniel Goldhagen devoted their lives to analyse genocide so that it doesn't occur anymore.
Goldhagen, the author of the famous Hitler's Willing Executioners and the new essay Worse than War, wrote in The New Republic:

"Just as it only takes one or a few political leaders to decide to slaughter or expel millions, so too can a few political leaders, a few moral men and women, go a long way toward ending such practices. (These relatively low-cost preventive measures compared to after-the-fact invasions also have the virtue of being far more likely to get them to act.) Let's not be content to utter pieties. Let's not wait for the glacially moving international community centered around the United Nations to evolve. The matter is urgent. Tens of thousands can die and be brutalized every day. The leaders of a few democracies, or even just the president of the United States, could institute bounties and guarantee the application of force. This would open up a new anti-eliminationist era".

Yad Vashem's Academic advisor Yehuda Bauer reflects on "Text and context in Shoah education” at a conference in Jerusalem.

“There is - said the scholar - any number of books dealing with Danzig and the corridor, and the attack on Poland, and the diplomatic things there, and the military preparations, and the economic situation, we know all that. That is not an explanation why the war broke out. Somebody wanted it to break out. And that somebody obviously was Nazi Germany. Nobody else wanted a war. Why did the Nazis want a war?”.

Bauer, documents in hand, answered: "Because the Nazis thought they would have to defeat Bolshevism, because Bolshevism in their opinion was Jewish, and Bolshevism wanted to replace the whole leading strata of humanity by Jews. That’s the reason for the war”.

The historian said to study the Holocaust it is necessary to learn about the way Jews reacted to the effort to annihilate them. More than the Holocaust itself, so goes his reasoning, "The Jewish reaction was [...] "unique", because there's no example in history of an unarmed cultural educational civilizational reaction to a mass murder situation to a genocidal situation by the civilians who were affected. And you have that in Warsaw, and you have that in Lodz, you have that in Vilna/Vilnius, you have it in many other places. Not only in Poland, also elsewhere. You have it in Terezin, in the Czech Repmoment, the slightest opportunity arose ".