30 years ago it defied the Communist power 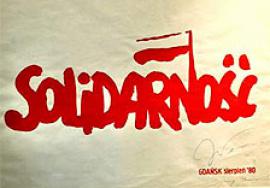 Solidarnosc was essential for the birth of the Polish democracy

On 10 November 1980 Solidarity was registered. The people's unhappiness with the imposition of Communism resulted in the creation of the free union opposing the regime.

The election of Karol Woytjla in 1978 had brought Poland centerstage. The intellectuals struggled with workers. Europe got to know Lech Wałȩsa, Tadeusz Mazowiecki and a new Polish leading class born within the anticommunist opposition.

Outside and against the ruling party the fight for freedom of conscience, speech and religion and the access to mass media developed. The activity of Solidarność was essential for the birth of the Polish democracy.