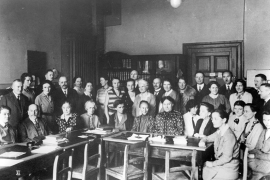 Elisabeth Abegg and her classroom

Over the terrible years, in which Nazi persecution raged all over Europe, many people decided, at the risk of their lives, not to quietly accept what was happening before their eyes, and to oppose the savagery they were witnessing. Many of them were teachers of different grades of education, but all having in common a deep humanity and consistency with what they had been teaching in the classroom for years, reciprocal respect and peaceful coexistence among human beings. Not all the people were heroes, not all had this courage, not all opposed this dreadful reality, but today Yad Vashem remembers and honours those “Righteous among the nations” - as they would be called afterwards – making people in the world aware about the deeds, often hidden, of these ordinary men and women who, on the contrary, were in reality extraordinary.

And also, scrolling the names and tales of these teachers – who never stopped seeing the kids as “their own students”, also when the law or a yellow star imposed a duty to discriminate them – we can admire how many extraordinary examples of this courage can be found scattered all over Europe. They were elementary teachers, such as Holland's Benjamin Blankestein, member of the local Resistance cell near Utrecht, who hid in his home the entire Bernstein family. Benjamin sheltered them in a room under the roof and in the silent nights he devoted himself to caring about little Rolf making him study in the dim light of a candle. Also Nuro Hoxha, who in the small town of Terbac decided to help his long time friend Ilia Salomoni, was an elementary teacher. Nuro hid her with her whole family for many months. When Ilia was arrested by the authorities, a first time n 1943 and then again in 1944, Nuro Hoxha even dared showing up at the police station threatening a revolt of the whole village in case his friend would not be immediately set free. He won.

Extraordinary was also the figure of Joseph Migneret, principal of an elementary school in Paris, in the Jewish neighbourhood of Marais, the destination of a huge number of Jewish immigrants from Eastern Europe. Migneret provided the young Jewish students of his school and their families with hundreds forged documents, and even hid at his home, for about two years, Sarah Traube, who owes him her life.

A similar tale takes us to Germany, in Berlin, where Alsatia's Elisabeth Abegg, teacher of a high class school, turned her small apartment – which she shared with her elderly mother and a disabled sister – into a reference point for all the Jews who tried to obtain forged documents to escape or simply to get into safety from reprisals. Ms. Abegg lend them an essential hand, and all this in defiance of the risks she ran, since some of her neighbours were Nazi activists.

In Florence, in Italy, we find the tale of Amato Billour, an English teacher, who with his wife Letizia kept at his home, for all the time of war, the son to Hulda Campagnano, Jewish, raising him with love and affection. Incredible was also the figure of Andreè Geulen, teacher in a high school in Brussels, who in her classroom had the Jewish students' yellow stars concealed, as she tolerated no discrimination. When persecution sharpened, Ms. Geulen helped and hid a lot of pupils, often inside the very school; one day following a round-up in the middle of the night, she was arrested, and when the German officer asked her whether she was not ashamed of teaching to Jewish children, she replied: “And are not you ashamed of waging war against children?”.

Dan Landsberg, a child at the time of persecution, told personally Yad Vashem as he owes his life to the courage of sister Gertrude Stanislawa Marciniak. Mother Superior of an orphanage in the outskirts of Warsaw, sister Gertrude, of the Elizabethan order, hid under her clothes little Dan, while the German soldiers raided the institute.

Gerda Valentiner, a Dane, did not only risk her life to hide and protect her Jewish students, but also had the extraordinary sensitiveness and considerateness to provide them with food in the respect of their Jewish faith and tradition. Besides these incredible tales, we could also mention those of Johann Westerweel, Russia's Alexander Kramarowsky or Ukraine's Vladimir Chernavor, first persecuted by the Soviets and then by the Nazis; all these are incredible tales, precious pieces of testimony that shall not be dispelled. On the contrary it shall teach us how the path chosen by the people was not always that of turning a blind eye in the face of violence and injustice.