Beatrice Murekatete decided to take care of more than 10 children, orphans of the Rwandan genocide 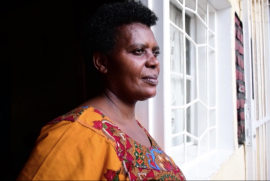 Beatrice Murekatete is one of the Rwandans who out of compassion decided to take care of more than 10 children, orphans of the 1994 genocide committed against the Tutsi.

''No one knew about me where I used to stay. - told Béatrice - I was not among those being hunted down then, because my husband was a Hutu. After Genocide committed against Tutsi I saw the orphans in my neighbourhood, I said to myself that may be it would add to the cost, but I had to do what it takes to help those children. After analyzing the situation I decided to adopt the children of our neighbours who had been killed. I started with two children. One lost a father during the Genocide committed against Tutsi and the mother died after the Genocide‘'.

Her husband, Eulade Basomingera, told that they fled the war and Genocide heading to Congo DR where they went as far as Kibumba but they came back to Rwanda in August 1994. At first the husband stayed in his home area of Ruhengeri before moving again to Kigali to join his wife.
“I arrived on 30th of August. I found my family here and joined them. Meanwhile, my wife's uncle’s family was then staying in the then Kibungo Prefecture. By the time she came back, she found her uncles; her grandmother and sisters all had been killed.”

“I Know Beatrice - Claudine Uwamahoro, Neighbour of Murekatete told - because I came to know her after the 1994 Genocide. You could see many children at her home and think why they are there. You could first imagine that it was maybe she had a school, but later you come to learn that any child who went there was taken care of”.

“As you see her - Rose Marie Mukabagorora, Resident of Muhima sector, told -, she was born with affectionate heart. Apart from those children she picks from the orphanage (Virgin Mary Centre), she has been taking care of almost every child in this area”.

Of the Children she raised, eight studied under the Fund to support poor survivors of the 1994 Genocide committed against the Tutsi (FARG) Sponsorship. Today you can still find many children who have faced different types of problems, mostly handed to her by local authorities. Last year, she received one million Francs from Nyarugenge district Authorities to support her business activities.

Jean Marie Vianney Umutoni, a child taken care by Mrs. Murekatete, said: “This was my real parent. She would always call us and say, I don’t have much, but we have to share whatever is available”.

“I came to meet Murekatete earlier on as we were neighbours - added Jean Bosco Ndahimana, another child taken care by Mrs. Murekatete -.  When our parents died, she sympathized with us following the condition we were left in and decided to bring us at her home and take care of us”.

At these voices, more can be added. Like the ones of another children taken care by Beatrice, Benelise Mukakuyongwa (“May God continue to bless her? Sometimes I come and find out that more little children have been brought to her. I don't know how I can thank her”), Jean de Dieu Rukundo (“Throughout the time I stayed here, I can hardly say that got everything I needed, but I could get all the basic needs. Be it food, drinks, clothes, I got everything throughout the period”) or Jose Kagoyire (“Despite the fact that this house may seem to be small, it housed us in a big number. Today at my age, I usually try to look back and imagine how we could all stay here and find it to be a strange thing. We never missed lunch or supper”).

''I truly thank God for enabling me to peacefully live with my loved ones with no bad thing happening from my side or from them - concluded Murekatete’s husband -. Even today we do visit each other, some are married, others are working, all is well and we are very happy about it”.