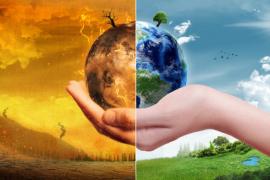 A scientific reality, a pending catastrophe for the planet. Although our society appears still divided between believers and non believers, Global Warming is a scientific reality studied and documented by the vast majority of scientists in the world (please refer to any major institution: U.N., NASA, US Navy, Harvard, MIT,..).

Global Warming is defined as the increase in the planet’s temperature over the preindustrial era and is caused by increasing amounts of carbon dioxide (CO2) and other greenhouse gases trapped in the atmosphere absorbing heat from the sun’s radiations. Man made activities such as burning fossil fuels, deforestation or livestock breeding are the main sources of emission of greenhouse gases.

This is the reason why scientists refer to our era as the Anthropocene, a new geological era in which humans are affecting our planet and its climate in ways and with consequences that we are only starting to comprehend.

The dangers of Global Warming are scientifically documented. The latest UN climate report (IPCC) states that emissions are still increasing and that if temperature increases above the preindustrial level by more than 1.5 Celsius (we are currently at about 1.0) Global Warming will have social and economical consequences worse than the most terrible wars and will cause the natural world as we know it to be damaged beyond repair.

Here is a brief shortlist:

A. massive food shortages would become the norm possibly within the next 12 years;
B. extreme weather events will multiply;
C. unique ecosystems will vanish and species will go extinct by the thousands;
D. nearly all the coral reefs will be dead by 2050,dramatically reducing the global annual catch from marine fisheries;
E. without dramatic reductions in emissions extreme heat will make entire regions unlivable by 2080: Southern Europe, Iraq and Syria and much of the rest of the Middle East; some of the most densely populated parts of Australia, Africa, and South America; and the breadbasket regions of China will be in permanent extreme drought;It could be considered the end of food for a vast majority of our species.
F. the likelihood of a sea-ice-free Arctic summer will increase from once per century to once per decade. It could release through its permafrost 1.8 trillion tons of carbon, more than double the amount currently suspended in the atmosphere;
G. according to OMS today air pollution kills 600.000 children around the world; by 2090, as many as 2 billion people globally will be breathing air above the WHO “safe” level (ref: NCAR) with drastic health consequences ranging from asthma, cancer, autism and human cognitive decline;

Overall, social conflict could more than double this century.

The scale of that economic devastation is hard to comprehend, but you can start by imagining what the world would look like today with an economy half as big, which would produce only half as much value, generating only half as much to offer the workers of the world.

Ten million more people would be exposed to permanent inundation, and several hundred million more to “climate-related risks and susceptible to poverty.” Malaria and dengue fever will be more widespread. The UN considers there will be several 100 million climate refugees by 2050.

Again, let me repeat this: Global Warming is a scientific reality documented by a vast majority of the scientists in the world. We are way past the time of believers and non believers, just read what major institutions have to say on the matter.

So what can we do? As citizens, individually?

Yes, these reports are daunting in every sense of the word. And yes it is probably worse than you think. But we get to choose how we react to them: we can either let it paralyze us, or we can let it empower us. In the Anthropocene era we have become a geological force, we as a species are actually physically affecting the way the planet will look like in 15 years. Why not become a positive geological force, a force for good?

We can start by bridging the disconnect between scientists and the rest of the world to accelerate systemic change.
In the early 90’s Governments came close to a global agreement to frieze carbon emissions but eventually failed. Since then Global Warming has slowly receded from the political arena and only in 2016 the Paris Agreement tried to revive politicians into action. Yet the disconnect is still here: either all the scientists are wrong or the world is today failing to act with the necessary speed.

As citizens we can raise awareness on the issue and as consumers we can change our behaviors to influence public policy and corporations. We can mobilize by sharing knowledge. Globalization allows the circulation and sharing of knowledge between billions of people. Exchange of data, research and knowledge could accelerate finding ideas, solutions and results.

We desperately need systemic change at every level but systemic change can also start with individual change.
There are many ways in which we can help: choosing renewable energies like electric cars when possible, using your bicycle more often, cutting your meat consumption in half, banning single use plastic (bottles, straws, cotton buds, bags) from your life, supporting the people, brands and organizations which embrace a sustainable lifestyle. Making your opinions on the environment heard in your community. We can all catalyze the change our world so desperately needs in our daily life. Yes of course we need to accept that being part of a systemic change comes at a cost of time, energy and money. It comes with a strong sense of individual responsibility. Where governments are failing cities and communities can take over. That is where our power for change lays today within ourselves and our communities.

If everybody woke up one morning and stopped using plastic water bottles (we use over 1 million water bottles per minute and 91% are not recycled and eventually end up in the Oceans) we could change the destiny of our Oceans over night. Over night.

Perhaps the most terrible consequence of Global Warming is the loss of basic human rights for the tens of millions of people. Drought and desertification are increasingly causing farmers and their families to become Climate refugees which the UN estimated will form the vast majority of refugees (more than 100 million) by 2050.

A refugee is not only a person going from one place to another, from the moment he or she leaves is house the refugee loses the support of the community, police protection, etc. the refugee is often deprived of every basic human right, as proven by the way in which women and children are treated in many refugees camp today. Global Warming is already the cause of a breakdown of communities and societies.

The poor and the weak will be the first victims of Global Warming. Greatly increased flow of migrants will confront and test the rich world anti-migration sentiment.

Drought will continue to increase over the next ten years. Cape Town or Rome may ran out of water but the rich countries have the means to mitigate the problem. For populations living in Africa or in the Middle East the only option when they will run out of water will be to emigrate and tens of millions will move north towards Europe.

Gariwo through its gardens and activities has been documenting, honoring and giving a voice to the righteous around the planet who have had a social, political and moral impact.
Global Warming, as we have seen, will create drastic social and economical consequence and in particular tens of millions of climate refugees with terrible implications for human rights around the planet. I would go as far as saying it may reevaluate our notions and values on human rights.

Beside climate refugees many environmental activists are being killed, 197 officially in 2017. This does not include the massacre of indigenous tribes in the Amazon, being bullied out of their ancestral land. It shows how our natural resources have become a precious commodity and how much important is to support the people protecting our planet on the front lines.

By creating a prize for environmental activists Gariwo will officially be giving a voice our planet so desperately needs. Global Warming will test the resilience of humanity to the limit. Institutions such as Gariwo, who honor human resilience and have often discovered it and brought it out of the shadows, can play a significant role in accelerating public recognition of the challenge ahead.