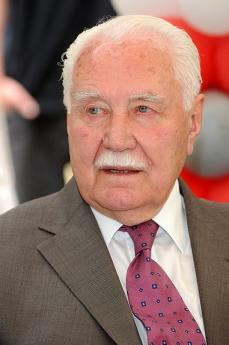 Ryszard Kaczorowski was born in Bialystok into a family of Poland’s lesser nobility. Before the war he was a member of the Scout movement. After his city was occupied by the Red Army, and the Scouts were consequently outlawed, he started an underground Scouts organization. In 1940 he was arrested by the NKVD and sentenced to death. His sentence was then reduced to ten years in a forced labour camp: he was deported to Kolyma. In 1941 he was released following the Sikorski-Majski pact and joined the army of general Anders, with whom he also fought at Montecassino. After the war he settled in England, where he concluded his studies in International Economics. He worked as an accountant throughout his life.
He was chairman of the Polish Scout movement in exile. In 1986 he was appointed Minister of the Interior of the Polish government in exile and, in 1988, the President in office, Kazimierz Sabbat, appointed him his successor. He became President in exile on 19 July 1989 when Sabbat unexpectedly died of a heart attack in a London street. Kaczorowski said: “President Sabbat had nominated me his successor, but nobody could possibly have imagined that it would turn out like this. It was the same day on which general Jaruzelski became president in Warsaw. One of history’s jokes”. When he took oath he was already almost 70 years old. Sabbat had not chosen him for any particular leadership skills, but especially because he was familiar with the Polish youth in exile and understood the internal situation of his country very well. He was president for just 18 months: on 22 December 1990 he flew to Warsaw to hand the presidential insignia to Poland’s new head of state, Lech Wałȩsa. This was not an easy step: like most members of Poland’s émigré community, he had little faith in the conclusions of the Round Table and was reluctant to conclude his political mission until totally free elections had been held. After 1990 he continued to live in London, but frequently visited Poland to take part in official events.