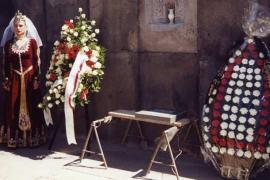 Along with the official commemoration of the Armenian Genocide, a solemn ceremony is held in the Yerevan Academy of Science to commemorate the figure and the work of Giacomo Gorrini, Consul General of Italy in Trebizond in 1915 and later Ambassador to the first Republic of Armenia from 1918 to 1920
Giacomo Gorrini was awarded the title of "Righteous for the Armenians" for having denounced the genocide and contributed to rescuing numerous deportees.

The commemoration took place in the presence of:
- the Italian Ambassador in Yerevan, Andrea Trabalza, who declared that he was honoured to represent an Italian such as Giacomo Gorrini;
- the Armenian Ambassador to Italy Gaghik Baghdassarian, who recalled the various steps in the struggle to get the Armenian genocide acknowledged by the Italian parliament;
- the Hon. Giancarlo Pagliarini, promoter of the motion carried by the same parliament in November 2000, in which Turkey was urged to acknowledge the genocide and the responsibilities of the Turkish government of the time.

Pietro Kuciukian, of the Union of Armenians in Italy, presented the figure of Gorrini and his merits with respect to the Armenians. As representative of the "Memory is the Future" Committee, set up to commemorate the people who opposed the Armenian genocide by awarding them the title of "Righteous for the Armenians", Kuciukian announced that this title had been conferred on Gorrini.
Ulianova Radice of the Committee "Per la Foresta Mondiale dei Giusti-Gariwo" underlined the importance of remembering the Righteous who fought against the genocides of the 20th century all over the world, especially in order to convey the fundamental values of humanity and civil coexistence to the young and to build a bridge of dialogue and redemption between the peoples that have suffered persecutions and those who have perpetrated them.

In the afternoon the ceremony proceeded at the Genocide Museum at Dzidzernagapert (the Hill of Swallows), in the presence of the curator of the museum Laurenti Barseghian.
Pietro Kuciukian laid the urn containing a fistful of earth from the grave of Giacomo Gorrini in the Wall of Remembrance, beside that of the other Righteous people on whom the title has been conferred over the last few years, including Anatole France and Armin T. Wegner. The whole ceremony was accompanied by the haunting strains of the duduk, the traditional Armenian musical instrument.
In the spirit of the creation of "Gardens of the Righteous Worldwide", at the end of the ceremony a tree was planted to commemorate Gorrini. The tree was donated by the Armenia Tree Project association, the aim of which is to contribute to the rebirth of Armenia.