New Righteous at the Garden of Warsaw

the ceremony in honour of seven exemplary figures 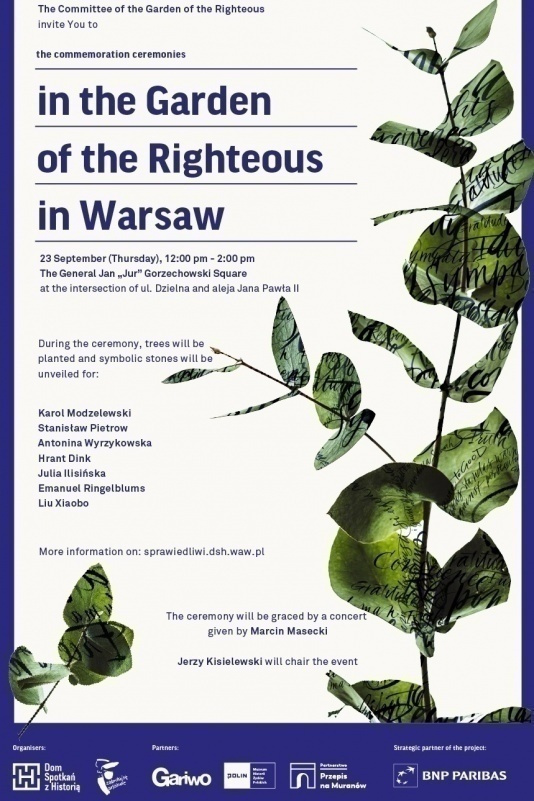 On September 23, 7 Righteous will be honoured in the Garden of Warsaw, located in the park, in front of the walls of the former notorious Pawlak prison, dedicated with a memorial stone to General Jan-Jur Gorzechowski (1874-1948), husband of the famous writer Zofia Nałkowska, who in 1906 freed from there, adventurously, some prisoners of the Russians sentenced to death.

The Garden of the Righteous in Warsaw, located near the former Jewish Ghetto area, is managed by the Warsaw “House of Encounters with History” in collaboration with the Gariwo Foundation and the “Polin” Museum of the History of Polish Jews.

This year the following will be honored: Karol Modzelewski (great historian of the Middle Ages, dissident, one of the founders of "Solidarność"); Stanisláv Evgráfovič Petróv (Soviet officer who, on September 26, 1983, did not believe in the false alarm of the detection systems and did not press the button of the missiles that could have triggered an atomic war); Antonina Wyrzykowska (with her husband Aleksander she witnessed the massacre of Jews in Jedwabne by Polish citizens; she risked her life to hide some and then was persecuted after the war); Hrant Dink (Turkish-Armenian journalist, founder and editor-in-chief of the magazine “Agos”, engaged in the defense of minorities and democracy, assassinated on January 19, 2007); Julia Ilisińska (shopkeeper and restaurateur, resident near Oświęcim/Auschwitz, member of the resistance, helped the prisoners with medicines and food; in 1941 she was arrested and tortured together with her husband Władysław, who was then shot on October 12, 1942); Emanuel Ringelblum (Polish Jewish historian, organized a precious Archive on the persecution of Jews in the Warsaw Ghetto which was found after the war; he was shot, together with his wife, Judith (Jehudis) Lewit Herman, on March 7, 1944); Liu Xiaobo (Chinese literary critic and writer, activist for the defense of human rights, promoter of the "Charta 08", Nobel Peace Prize in 2010, imprisoned from 2009 to 2017 when he died for lack of care).

These Righteous belong to different histories, places and times. All sacrificed themselves, often paying with long detentions and/or with their lives, committing themselves to the salvation of others and to the truth. The Gariwo Foundation, since its creation twenty years ago, has had, with the Garden of the Righteous (more than a hundred in Italy and already a dozen in the world), the specific and educational purpose of showing citizens, and teaching children, through figures of the Righteous, who can counteract extreme evil, save others in danger, recognize and prevent genocides, mass atrocities and hatred.

Speaking of the memory of good in Warsaw, one cannot fail to mention the story of the zoologist Jan Żabiński (1897-1974), director of the Warsaw Zoo, a member of the Polish resistance, who entered the Ghetto thanks to his position as Superintendent of city ​​parks. It was precisely in this office that, when the Warsaw Ghetto was established, he managed to obtain permission to enter the Jüdischer Wohnbezirk under the pretext of looking after the flora and trees of the small public garden housed in it. Once inside the Ghetto, however, Jan went to his Jewish acquaintances, friends or suppliers, giving them food, news or even helping them escape. When Jan was arrested and imprisoned, after taking part in the Warsaw Uprising in August 1944, his wife Antonina Zabinska continued to save the persecuted by hiding them in the abandoned cages of the Zoo and in her own home.
Thanks to their commitment, the couple managed to save about 300 people from hunger in the Ghetto and from deportation to concentration camps. As Jan Żabiński wrote in his testimony: “I do not belong to any party and no party program guided me during the occupation. I am a Pole, a democrat. My actions were and are the result of a progressive-humanistic education that I received at home ”.

The representatives of the reality involved will participate in the tree planting ceremony in honor of the Righteous; for Gariwo the essayist and writer Francesco M. Cataluccio. The wife of Chinese dissident Liu Xiaobo, Liu Xia will be also preset. A human rights activist in China, she is honored with Xiaobo at Milan's Garden of the Righteous Worldwide. The ceremony will be conducted by radio and television journalist Jerzy Kisielewski.