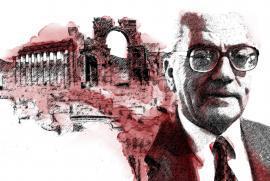 The international meeting "The moral example set by Khaled al-Asaad. Saving Palmyra, civil heritage of Humanity” of 18 November will take place at 17.30 at Piccolo Teatro Grassi in Via Rovello 2 - and not in Alessi Room as previously indicated.

“The date of Wednesday, dedicated to Khaled al-Asaad - said Milan's Mayor Giuliano Pisapia - will be a great unitary and civic response of the entire city against violence and terror. After the hoisting of the French flag today at Palazzo Marino and the minute of silence dedicated to the Paris massacre by the City Council, on Wednesday we will thus have a further unitary moment of reflection.  I am thus inviting all Milanese citizens to participate both in the morning ceremony at the Garden of the Righteous and in the afternoon's meeting, which we have decided to move from Alessi Room to the Piccolo Teatro of via Rovello precisely to enable the vast majority of people to attend this moment of collective reflection”.