A new Garden of the Righteous is born in Lebanon

in the village of Kfarnabrakh 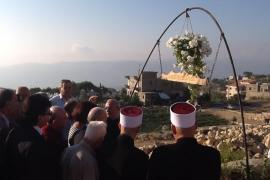 An image from the inauguration

On Saturday, June 29 in the village of Kfarnabrakh, 45 km from Beirut, the first Garden of the Righteous in Lebanon was inaugurated with the dedication of olive trees in honour of ten Righteous belonging to different ethnic groups, religions and beliefs.

The initiative stems from the common will of Gariwo and the Lebanese association Annas Linnas to pursue the common good and solidarity, and took place within the Sensorial Educational Garden located on the hill of Kfarnabrakh (kfar = house-country-territory, nabrakh = blessed), about 1,100m above sea level in the Chouf District of the Mount Lebanon chain. The association Annas Linnas, established in 2009 by the Greek-Melchite-Basiliense father Abdo Raad to promote coexistence between local population and refugees, has been committed since 2011 to alleviating the inconveniences caused by the arrival of new refugees from the neighboring countries. Among its activities there is precisely the Sensorial Educational Garden, designed as an open space for individual prayer and collective discussion in contact with nature.

"I am very happy that a new place of memory of the Righteous is born in the Middle East, in addition to the one created in 2016 in Tunis inside the Embassy of Italy and at the Garden of Good created in 2017 in Jordan with the association EcoPeace Middle East", declared Pietro Kuciukian, Honorary Consul of the Republic of Armenia in Italy and co-founder of Gariwo, who was at the inauguration ceremony together with the Ambassador of the Republic of Armenia in Lebanon Vahagan Atabekyan, to Father Abdo Raad and the representative of the Municipality of Kfarnabrakh. "In the spring of 2019 ten olive trees were planted in the Garden of Kfarnabrakh, a symbol of peace, in memory and testimony of ten Righteous of the humanity whose memory will be made imperishable by the stone of Lebanon in which their names will be engraved", Father Abdo Raad added.

These are the Righteous honoured: Carlo Angela, Faraaz Hussein, Jakob and Elisabeth Künzler, Antonia Locatelli, Fridtjof Nansen, Andrej Sacharov, Sophie Scholl, Azucena Villaflor and Armin T. Wegner. The ceremony was also the occasion to thank the Swiss association Elias and in particular its President, Yves Tabin, for the important contribution given for the realization of the Garden.

A Garden in Lebanon