birth of new Gardens of the Righteous 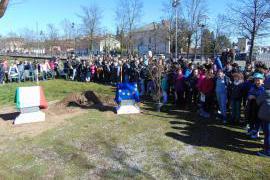 The celebrations of European Day of the Righteous have seen the participation of numerous Italian towns which, through meetings, conferences, shows, documentaries, books and planting of new Gardens, have paid tribute to all those who have fought and still fight against genocide and to defend human dignity.

So here you are with Assisi that brought life, upon the association Italy Israel of Perugia, to its own Garden of the Righteous in the courtyard of the Bishop’s palace, which was the centre of a broad solidarity network that saved 300 Jews from the death camps during Second World War.

A new Garden of the Righteous was born also in Orzinuovi, thanks to the commitment of association Filosofi Lungo l’Oglio and its director Francesca Nodari. This place’s first trees have been dedicated to Primo Levi, Armin Wegner, Amneris Manenti and the Trapist monks.

Protagonists of the Day have been above all young people. In Benevento, the pupils of Liceo Scientifico “Rummo” dedicated a tree in their school’s courtyard to the ambassador to Chile in the Seventies Emilio Barbarani. “In the middle of the Seventies – the pupils explained – after Pinochet’s coup, for months the Italian Embassy of Santiago del Chile became shelter to hundreds endangered opponents. The difficult situation was coped with successfully by consul Emilio Barbarani, who organized the escape aborad of nearly 750 people, including leftwing militants, supporters of Allende’s governments, men, women and children who only wanted to flee the terror climate that had gained momentum at the time. Emilio Barbarani performed his deeds with the sole and only aim to help his neighbour, knowing that every minimum mistake would compromise not only the lives of the refugees, but also his own. Who more a man who put his life and work to the cause of good, deserves to be remembered among the Righteous?”.

New trees have been planted also in Calvisano, where a Garden of the Righteous was set up in honor of Irena Sendler and Armin Wegner, in Spezzano Albanese, Mantua, Segni and Palermo. Ceremonies were held also in Rimini, Pistoia, Padua, Torre de’Passeri, Anghiari, Solaro, Massa Finalese, Forlì, Thiene, Busto Arsizio and Bitonto.