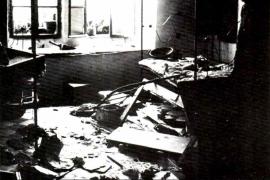 The Professor at the Israel Open University and expert on Holocaust studies Yair Auron, tells us of his latest research, which led to the book "Rescuers 1929 - Rescue Stories of Jews and Palestinians in Hebron", on the Palestinians who during the 1929 saved the Jews from the massacre by other Palestinians. Together with these rescuers, for the Day of the Righteous 2018, the village of Neve Shalom Wahat Al Salam will also honour Alganesh Fessaha, formerly Righteous at the Garden of Milan, for her commitment in saving lives in Africa. We publish below the text for Gariwo by the Professor.

The bloody conflict between Jews a Palestinians is continuing for more than hundred years and we do not see its end. Many innocent people, Palestinians and Jews were killed, sometimes even murdered and massacred, during this terrible conflict.

Actually in both societies the mainstream attitude and view is that the other side is a killer, and even murderer: The Palestinians want to kill the Jews and throw them to the sea, think and say many Israeli-Jews. Many Palestinians think and say that the Jews want to transfer them, to commit ethnic cleansing and even genocide.

But during all these events and during the long conflict, till these very days, there were people who saved people from the "other side", from" the side of the enemy" (one chapter in the book deals with the present rescuers in both societies).

After many years of studying and teaching Holocaust and Genocide I decided to focus on the phenomenon of those who saved human lives during different conflicts; the rescuers, the righteous. Among the rescuers I am working especially about Jews and Palestinians who saved people from the other side, from the side of the enemy. Sometimes they risked their lives and the lives of their families, and sometimes they even lost their lives in doing it.

THESE ACTS OF HUMAN HEROISM ARE ALMOST UNKNOWN among Israelis a Palestinians and much less in the world.

Why we do not know about these acts of heroism? It is because the mainstream's attitude in both societies and their political leaderships, unfortunately, do not want to tell these stories, because knowing about the Rescuers, the Righteous of the other side,of "the side of the enemy", can destroy the negative image and the negative stereotype of the enemy.

In the very moving two events for launching my new book "Rescuers of 1929 – Stories of Jews and Palestinians in Hebron and Jerusalem" (Padres Publishing House, 2018) in my university, The Open University of Israel, and in my village, Neve Shalom – Wahat al Salam, questions were raised several times from the audience like: "I finished my high-school in Israel and have a university's degrees, Why it is the first time I am hearing about Palestinians rescuers?".

Our anthology tells the heroic acts during what is known in Israel as "the massacres of 1929". Some scholars consider these events as the beginning of the physical, bloody conflict between Jews and Palestinians ("1929 Year Zero of the Jewish-Arab Conflict", is the title of a book written by Professor Hill Cohen who contributed to our book).

During the events that begun in 23 of August 1929, 133 Jews were killed, but also 116 Palestinians were killed, some of them by the English Police (Palestine was under English mandate from 1917 to 1948), but others were killed and even massacred by Jews. I have to admit that I myself did not know these details till lastly…

The book focuses on Hebron, the bloodiest place during the events 1929. 67 Jews were massacred but the majority of more than 600 Jews who lived in Hebron were saved by the Palestinians of Hebron,

We want to translate the book into Arabic and maybe to other languages. The moral, educational and philosophical significance of these heroic moral acts are really great. It is another evidence of what is for me, after so many years of working about Holocaust and Genocide, their legacy: the universal value of human life, wherever it may be found, including of course, Palestinian as Jew.

We decided to honour in our International Garden of Rescuers on the occasion of the Day of the Righteous 2018 to Dr. Alganesc Fesseha who is saving many refugees in Africa, and to the Palestinians who saved Jews in Hebron on 1929.

by Yair Auron, Professor at the Israel Open University and expert on Holocaust studies