European Day of the Righteous all over Italy

Report about all 2016 events 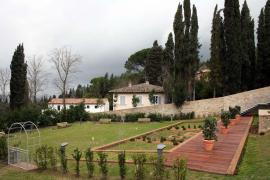 The Garden of the Righteous in Perugia

This year, too, European Day of the Righteous witnessed the participation of dozens Italian towns, which have sought to remember the deeds of those who have opposed genocide and persecutions.

The start was in Milano, with the 3-day event held by Gariwo to honour six outstanding women from all over the world: Flavia Agnes, Sonita Alizadeh, Felicia Impastato, Halima Bashir, Vian Dakhil and Azucena Villaflor. These mothers, wives, sisters, women who too often have sacrificed their lives to protect human freedom, have been honoured through a number of events, from the concert of Maestro Gaetano Liguori, with readings by actress Sonia Bergamasco, to an international conference on the achievements and defeats of women’s legislation in the world, the whole of this crowned with the usual ceremony of dedication of the new trees to the Garden of the Righteous on Monte Stella Hill.

The Righteous’ message has been celebrated all over the Italian Peninsula and in our islands, with ceremonies of dedication of trees, public readings, exhibitions, and concerts. In Bergamo, Campobasso, Roma, Carpi and Perugia, among others, there was the birth of new Gardens of the Righteous, with new trees whose growth will be a tangible proof of the courage of those who, risking their lives, chose Goodness and stood up against indifference.

The guest of the events in Pistoia was Yolande Mukagasana – to whom since 2012 a tree has been dedicated in the Garden of Monte Stella Hill in Milan – and who was the recipient of the dedication of a plaque for her work a san educator to the respect of human rights. Yolande Mukagasana’s message is strong and always up-to-date: “only through respect, tolerance, and care for the others, human beings can reopen horizons of meaning for their societies".

In Assisi the ceremony at the Garden of the Righteous at the Diocesan Curia was completed by a visit to the underground corridors, where many Jews were kept hidden during WW2. Numerous were also the schools that took part in the celebrations of Day of the Righteous, with true inaugurations of Gardens inside the institutes, like at Lanino Institute of Vercelli, and dedications of new trees, like at Liceo Cattaneo di Torino, at Istituto Montalcini of Spezzano Albanese, Istituto Rogasi of Pozzallo and Liceo Linguistico Europeo of Bitonto, where also the middle schools have joined a contest in which pupils had to “seek” the Righteous in the different continents.

Numerous events were dedicated to women, like the three-day initiative held by Gariwo, a celebration of the suffragettes in Anghiari, the planting of a garden in memory of Anna Politkovskaja and Khaled al-Asaad in Civita Castellana, while in San Giorgio su Legnano 70 lives of women who made Italy great have been celebrated.

And many more are the towns and villages that have joined the celebrations of the Righteous this year, too: Arco (TN), Albagiara (OR), Agrigento, Benevento, Busto Arsizio, Calvisano (BS), Guidizzolo (MN), Orzinuovi, Palermo, Pavullo (MO), Solaro (MI), Torre de' Passeri, and, outside Italy, also London, Prague and Warsaw.

The success of these events cannot but help reassess the key idea that the tales of the Righteous teach us: i.e. that memory is the best way not to commit the same errors of the past and prevent the courageous and outstanding deeds of the Righteous from leaving no trace.

Whoever saves a life saves the entire world.