"Deep down in the human heart there is goodness" 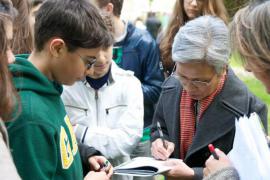 Gabriele Nissim, Gariwo’s Chairman and author of La Bontà insensata (Senseless goodness) participated on 30 January to meeting “Crossing through evil” with Claire Ly, witness to the Cambodian genocide who has been honoured with a tree in the Garden of the Righteous of Milan.

To the extermination perpetrated by the Khmer rouges Claire lost her husband, father and two of her brothers. In the gulag she has undertaken a spiritual path that has led her, after forty years, to work through the past and share the memory with others through books and conferences.

During this crossing she has changed religion, from Buddhism to Christendom, and she has come to embrace the concept of Christian forgiveness. In her book La Mangrove she wrote that in her live two souls: the moral teachings of both great religions. The goodness discovered by Claire and the experience of the Righteous will be at the core of the European Day of the Righteous, the next 6 March.

Tonight you speak about both the Holocaust and the Cambodian genocide. Which lessons is it possible to learn from these historical tragedies?

You can’t really learn lessons, but you can realise that violence is already inside the heart of the human being, it is inside us before being in the other’s soul, and we need to pay a great deal of attention to every kind of “purification policy”. In the Holocaust Nazis talked about “pure race”, the Khmer rouges talked about “pure society”. In the name of purity it is possible to perpetrate violence. The problem is therefore the word “pure”, “pureness”, which can lead to “purification policies”.

What can the international community do to make the “never again” invocation we pronounce after every tragedy true?

We have always said “Never again” ever since the Holocaust, but in reality in Cambodia, in Rwanda and so on genocides have happened again and many more are unfolding now. I think the international community must watch for the emergence of purification policies, violent policies or policies that exploit religions for political purposes. In particular we must prevent religion from becoming a reason of identity for a people.

What helped you survive the Cambodian genocide?

The thing that I believe helps people survive is the thirst for life. For me that was it. At the beginning I wished to live on because I wanted to take revenge for the tragedy occurred in Cambodia. This was my first feeling, which later faded though. At the moment I don’t wish to take revenge any longer. The whole of us tend to respond to violence by violent means, to take revenge of the pain suffered. But victims have the possibility to accomplish a spiritual path to learn not to respond to violence by violent means. To do this we need to believe in Something greater than us.

What meaning and/ or importance may the European day of the Righteous have?

It is important to assess that there is not only blind violence, to sheer force one can respond by goodness. In the human being’s heart there are both violence and goodness. A French survivor to the violence of the Chinese regime, François Cheng, opposes goodness to violence. Violence destroys, goodness instead makes us believe that despite all life is beautiful, and good.

The Righteous are not supermen or superwomen, but above all they are human beings who have chosen not to follow blindly the policies of violence and purification.

And who are Cambodia’s Righteous?

The majority of the Righteous of Cambodia are perhaps the Buddhists who lived far from the cities.

Could you tell us some names?

I think of the people who have helped me when I was in the camp, but the majority of them has already died and at any rate according to the Cambodian traditions I cannot mention them without the authorization from their families.

Do you consider yourself a Righteous?

No, I am simply somebody who has survived and has chosen to bear testimony for the generation sto come, but I don’t really consider myself as a Righteous.

You are really unpretentious. In your opinion can religious faith help the younger people to learn to respect and love the others, or their neighbours as Christendom says?

The aim of all religion is to teach the human being to be good, but when religion does not do this, it means that it is doing something else, and it has failed. In those cases it plays politics, demagoguery… All human beings need religion, but it doesn’t have to become something identity-related. My religion mustn’t oppose the one of the other otherwise we come to closures and we don’t manage anymore to listen to eachother. Faith means believing in Something greater than us, greater than one’s own country, greater than one’s identity and that remains open to every possible dialogue.

Are you planning to write other books?

I don’t know, I am a woman and when I write a book it is as if I held a baby in my lap with everything that this means: conception, care, delivery, the upbringing of the little creature… At the moment I would like to rewrite my recent book, La Mangrove, in Cambodian.

In Cambodia not many people have been tried for the crimes of the Khmer rouges. Why is the action of the International Tribunal somehow limited? Do you feel like talking about these trials?

I think that the International Court for Cambodia failed to respect local culture. It imposed Western points of views and this is why it didn’t work properly. There has been a cultural misunderstanding with the khmer people.

I could bring many examples. One misunderstanding concerns the aim of justice, which is of course also that of punishing and sentencing people but is also the one of reparation of the damages inflicted to the victims. This tribunal has been unable to do so. Furthermore justice must also improve peaceful coexistence in harmony. The social links have not been developed as hopes, considering that the one of Cambodia before being a genocide has been a fratricide. Then justice also mean to make the “never again” hope true, and this is why one should understand the cause, why there has been the khmer rouges and so on. And the tribunal esamine the years 1965-1979, not the preceding years that led to the seizure of power by the khmer rouges. This is why it failed.

What do you think of the persecutions of Christians in the world?

Persecution ha sto do with politics, policies that exploit religion as a criterion for identity. This causes violence. Religions must learn that they are not absolute, that each of them is the fruit of a historical and social development. Religion perhaps should also down play a little bit its proselitism.

What do you think of the assaults of the Islamist fundamentalists against the monuments of other faiths, such as the Buddha statues in Afghanistan or the Christian churches in some parts of Africa?

I think that those who commit this are not really believers, hut rather terrorists. If they are Muslims, they have betrayed their faith because I don’t believe Islam was born to educate people to violence. Islam like all other faiths was born to help the human beings discover goodness inside their hearts. Furthermore those statues and churches are a world heritage, a heritage of the whole humanity.