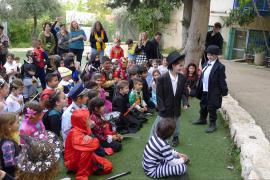 Purim celebration at the primary school

A hill in Israel, half way between Jerusalem and Tel Aviv. A dream that has taken roots on this hill since the beginning of the Seventies. A village bearing a Jewish-Arab name: Neve Shalom Wahat al-Salam. Which means “Oasis of peace”. An intentional community of families (the only one in Israel), half Jewish and half Palestinian, all whom are Israeli citizens, who have chosen to live together and have their children attend the same schools. Thus giving rise to a concrete model of coexistence on an equal footing and opening up to the rest of the country and other Israeli and Palestinian entities, which work to build dialogue.

“We are not equal, we are different. And the issue is: how to co-exist, despite the differences. What we live here is not at all a utopia.” So Cobi Sonnenschein – three children born and bred in Neve Shalom Wahat al-Salam – sums up what in his opinion is the essence of the message at the core of NSWAS.

The Village was founded in 1972 – in land of the close monastery of Latrun – by Dominican father Bruno Hussar, a Jew who had become a Christian, a builder of bridges between different faiths, cultures and traditions, and Anne Le Meignen. Its name stems from one of Isaiah’s books (32,18): “My people will live in peaceful dwelling places”. Today it hosts 60 families, half of which Jewish and the other half Palestinian. An expansion plan has been scheduled to host 30 more families, equally divided between the two groups. NSWAS has a democratically elected mayor, and all decisions concerning the community are periodically discussed in a general assembly.

Reciprocal acceptance, bilingualism, (Hebrew and Arabic are on an equal footing and enjoy the same dignity), interfaith dialogue, respect during the daily life are the “pillars” on which the life in NSWAS relies.
What makes them effective is: a bilingual and bi-national educational system, that goes from kindergarten to the primary school, implemented in Israel for the first time precisely here; the pioneering educational work of the School for peace (that holds courses of education to peace and conflict management for young people and adults), the presence of a Plurality Spiritual center of the community and a Museum of peace.

The Village also hosts a Garden of the Righteous, inaugurated in 2015 thanks to Gariwo.

The educational factor plays a key role: the kindergarten, then the school, were first established out of the families’ wish to have their kids study together and not in separate schools for Jews and Arabs, since the very beginning of this experience. Today 90% of the pupils of the primary school comes from close cities and villages. Every classroom is divided equally between Jews and Arabs. Teachers, of both peoples, talk to children exclusively in their own mother tongue.

Thus they try to develop each child’s identity through the learning his or her own culture, history and traditions and, at the same time, learning about and respecting the culture and history of the other people. Knowing one’s own identity is considered as the first step to be able to establish a dialogue with the “other” on an equal footing. NSWAS’ educational system represents a model taken up by other experiences, both in Israel and in other countries with clashing ethnic groups.

Meeting face to face. Recognizing and becoming aware of the role that everyone, willing or not, plays in the conflict. To be able to move on. This, to sum up, is the effort made by the School for peace, and the whole village.

“What is striking in our work with young people – said Nava, director of the School for peace– is the importance of living them the opportunity to meet with the “other” face to face, and discovering they have many things in common, shared visions of the future. The strong factor is the recognition by both groups of the need for equality”.

NSWAS has different Associations of Friends all over the world, which promote its message and support the educational institutions. In Italy, in Milan, there is the Associazione Italiana Amici di Neve Shalom Wahat al-Salam (info: it@nswas.info).

Website of the Village of Neve Shalom Wahat al-Salam: wasns.org