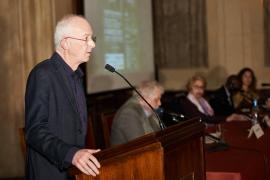 I would like to start by a quotation: “States based on religion close their people in the circle of faith and fear "

This sentence could have been uttered in many world’s countries. Its author is Raif Badawi and the fear he mentions is the fear of free thought, an independent opinion and a critical voice.

This is why Raif Badawi has scared the authorities of his country, Saudi Arabia. It is because he defied fear.

As it is known, Raif Badawi was accused of offending Islam through his online forum, “Free Saudi liberals”. Those who have read his writings, published since 2015 in Italy, too, has understood things are not this way.

After risking death penalty for the additional crime of “apostasy” (charges against Badawii also include putting a “Like” onto the Facebook page of some Christian Arabs), on 7 May 2014 Raif Badawi was sentenced to 10 years in jail, 1000 lashes and a fine of one million rials. The sentence was definitively upended by the Supreme Court on 6 June 2015.

On 9 January 2015, hence even before than the Supreme Court made it impossibile to call for an appeal, Raif Badawi was handed down the first series of 50 lashes. A foul deed, shamefully exposed to a jubilant crowd decrying the greatness of Allah outside the main mosque of Jeddah.

A small, bitter parenthesis: two days later, Saudi Arabia through it ambassador in France participated in the solidarity march for the editorial board of Charlie Hebdo, slaughtered in an armed assault some days before. Their message was: you can also appreciate and defend freedom of expression abroad, but within the country it must be stifled, through jail and flogging.

Every Friday morning after 9 January, since then, has started in anguish and ended with breath of relief of everybody. Floggings took place no longer. It was the merit, perhaps, of the generous, extraordinary mobilization of thousands people who, in the world, every Thursday morning, week after week and in every weather conditions, have demonstrated in front of the embassies of Saudi Arabia to demand pardon.

On 12 February, still in 2015, in the course of one of the 11 consecutive weekly sit-ins in front of the embassy of Saudi Arabia, thanks to a police official I managed to convinced an embassy officer to open the armoured door and receive 15,000 signatures that Amnesty International had gathered inthe past month. Thousands others were sent directly to the governments at the end of 2014. I am convinced they have been useful.

I would like to invite you to imagine, in their Canadian exile, the three children of Raif Badawi’s (14 years old Najwa, 13 years old Terad and 10 years old Miryam) who still today wake up – in case they manage to sleep – on Friday morning and wonder if their Dad within a few hours is going to be flogged. Imagine them while they go to school. Imagine Ensaf Haidar, Raif’s wife, who cannot even allow herself to give in to suffering and anguis, because she must suffer her children.

The case of Raif Badawi shows more than any other the features of the judicial system of Saudi Arabia: arbitrariness, lack of transparency, cruelty.

But it is also emblematic of the inconstancy of the international community, the double standards of its members and its most powerful leaders when human rights are dealt with, on which the need to “keep close ties” with an important ally in a complex geopolitical area prevails. In facts, Saudi Arabia is a symbol of what is stubbornly called as “moderate Islam”, a useful partner against the threats of terrorism and a flourishing market for the sale of weapons. Never mind, you know, if such “moderation” and “usefulness” are proven untrue by facts.

It suffices to ignore facts. If you ignore them, they do not exist. As Raif Badawi does not exist, if not for a few people. This is why it is important to remember him these days and in such a beautiful way.