The Memory of the Polish Righteous 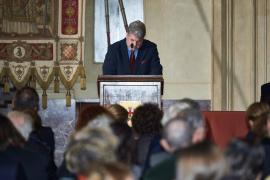 Mr. Jacubowski in the Alessi Room

Dear Righteous and their Relatives, Dear Hosts, Dear Ladies and Gentlemen. Let me first express my warmest regards on behalf of the Committee for the Garden of the Righteous in Warsaw. I also would like to give my regards on behalf of the History Meeting House – an institution of culture of the Warsaw self-government – which for five years now has been promoting the idea of the Righteous in Poland, as defined in the resolution of the European Parliament of May 10, 2012.

At this moment let me also express my sincere thanks to the GARIWO Foundation and, personally, to its President, Mr. Gabriele Nissim, for his invitation to attend this year's celebrations organized on the hill of Monte Stella in Milan and honoring the next five Righteous. It is on the inspiration of the GARIWO organization and in the persons of Gabriele Nissim and Annalia Guglielmi that the History Meeting House undertook efforts that ultimately led to the opening of the Garden of Righteous in Warsaw in 2014.

We started our cooperation with GARIWO as early as at the time when first endeavours of the European Parliament for passing the resolution establishing the European Day of Remembrance for the Righteous were undertaken. On March 6, 2013, the Honory Committee of the European Day of Rememebrance for the Righteous was established at the History Meeting House, which in time changed its name into the Committee for the Garden of the Righteous in Warsaw. Prominent intellectuals and well-known representatives of the public life in Poland were selected as its members. The first chair of the Committee was Tadeusz Mazowiecki – the first non-communist prime minister after 1989, and before that – an activist of the democratic opposition in the Polish People’s Republic. He passed away in the autumn of 2013. By the decision of the Committee for the Garden of the Righteous led by a new chair, Zbigniew Gluza (an activist of the anti-communist opposition, chairman of the KARTA Centre documenting the newest history), Tadeusz Mazowiecki found his place in the group of the first five Righteous whose memory is commemorated in the Warsaw Garden.

On June 5, 2014, we inaugurated the Garden of the Righteous, located in the grand and symbolical place in the capital city, that is on the territory of the former ghetto, just a few hundred meters from the newly-opened Museum of the History of Polish Jews, POLIN, erected in the place where the last bunker of the command of the Warsaw Ghetto Uprising fell in 1943. Nearby, the famous Ghetto Heroes Monument, designed by Natan Rapapport, has been standing since 1948.

We have adopted both the arrangement of the Garden and the way to commemorate the memory of the Righteous in the form of trees and stones with inscriptions directly from the Garden in Milan. Last Monday, on 6 March, a yearly festive gala took place at the Museum of the History of Polish Jews, where a decision of the Committe for the Garden of the Righteous was announced to select three new persons whose memory is to be commemorated in the Garden in June. These are: Natalia Gorbaniewska – a poet, translator, long-term human rights activist in the USSR; Jan Jelinek – a Czech evangelical pastor who during World War II saved many Jews, Poles and Ukrainians in Volyn; and Roberto Kozak – an Argentinian diplomat who in the 1970s and 1980s saved thousands of Chileans from the repressions of Augusto Pinochet’s Junta.

Now as many as fifteen Righteous will contribute to an even more richer panorama of rightful conduct and attitude, bringing hope for and belief in men. And an encouraging awareness that even in the darkest hour, when evil and violence seem to triumph peremptorily, some brave units still have courage to help their fellows unconditionally, often at the risk of their own lives.

It is with satisfaction that we observe that thanks to the strong involvement of the members of the Committee for the Garden of the Righteous and all collaborating institutions and organizations as well as individual supporters of this project the idea of commemorating the memory of the Righteous in Poland is growing stronger with each year. This phenomenon is also possible thanks to the educational potential which translates itself into numerous initiatives invoking the figures of the Righteous; workshops, contests for youth, educational packs.

The Italian provenance of the project is emphasized by international educational undertakings gathering both the Polish and Italian youth and artistic events at annual galas and celebrations taking place in the Garden and organized within the framework of the project. Last Monday, for example, a gala organized at the occasion of the European Day of Remembrance for the Righteous was honored by an outstanding concert given by Italian artists, who performed the compositions of Astor Piazzolla with flying colours. A long-standing partner of the events organized within the Garden of the Righteous is the Italian Institute of Culture in Warsaw. This year we plan to strengthen even more our cooperation with GARIWO.

In my final words let me again express my sincere gratitude for this invitation. It is a great honor and privilege for me to participate in these events commemorating the next five great personages in the oldest Garden of the Righteous in Milan. By meeting here we can pay tribute to all the Righteous, and thereby to all humanistic values reflected in their biographies.