Solution to Violence Must Be Strategic 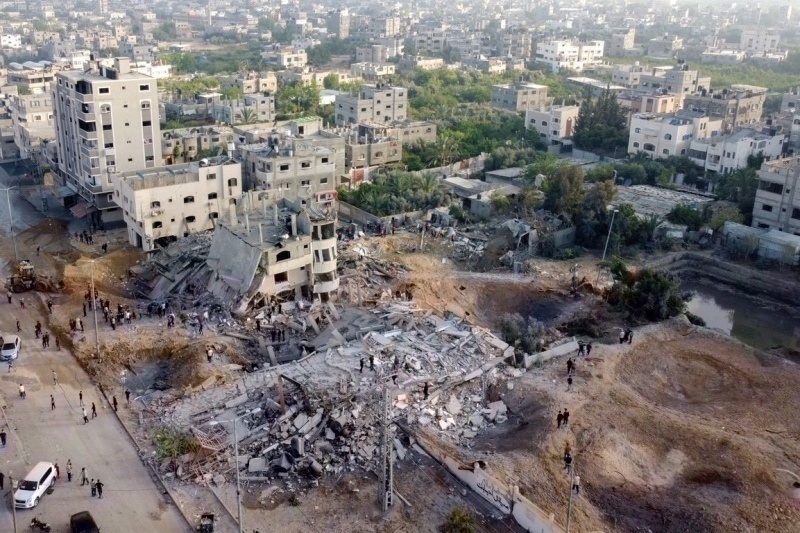 Here you can read an article by Nadav Tamir, published in The Times of Israel on May 13, 2021. Nadav Tamir is the executive director of J Street Israel, a member of the board of the Mitvim think-tank, adviser for international affairs at the Peres Center for Peace and Innovation, and member of the steering committee of the Geneva Initiative. He was an adviser of President Shimon Peres and served in the Israel embassy in Washington and as consul general to New England.

Every time an exchange of blows begins between Israel and Hamas, we hear advice from politicians and military commentators on what needs to be done in response – to strike, to renew deterrence, to charge a price. These tactical responses sound logical to most Israelis who suffer from Hamas’s missile terrorism and feel a human need to respond to aggression.

However, this is an illusion because there is no tactical solution to the Gaza issue, neither the military responses nor the short-term settlement with Qatari funding. There is no military answer to the Gaza issue, not even in the hands of the most powerful army in the Middle East. There is also no ability to separate Gaza from the other elements of the Palestinian reality in the West Bank and among the Arab citizens of Israel.

Hamas represents a Palestinian public that will not disappear, Islamists who are not the majority of the Palestinian population. Hamas manages to gain popularity among non-Islamist Palestinians by taking advantage and stepping into a vacuum. When we ignore Palestinians’ personal aspirations, national symbols and Muslim traditions (which are common also to non-Islamist Muslims) we strengthen extremism.

The so-called Nation-State law, which discriminates against Israeli Arabs, the expulsion of Palestinian Jerusalemite families from their homes in Sheikh Jarrah, violations of the status quo on the Temple Mount/Haram El Sharif and police violence in general and especially within one of the holy sites of Islam all strengthen radicals who see nothing but opportunity.

The separation between Gaza and the West Bank that Israeli governments are trying to promote does not work, because there is no solution to Gaza without a comprehensive solution to the Palestinian issue. The West Bank and Gaza are two different but common parts, just as liberal cosmopolitan Tel Aviv and religious nationalist Jerusalem cannot be separated.

The Israeli government is rewarding Hamas with funds from Qatar to achieve short term quiet and avoid engaging in the central issues between us and the Palestinians. At the same time, our government tends to weaken the moderate Palestinian elements who are interested in a non-violent solution to the conflict and believe that diplomacy rather than terrorism is the way to achieve their national aspirations.

There is an unwritten alliance of interests between Palestinian’s extremists and our extremists, who are now also represented in the Knesset. The extremists on both sides believe that chaos and violence strengthen them politically. This current round is another example of this pattern that is repeated over and over again, but we seem unable to learn from experience. This time we see this horrific violent radicalization within Israeli mixed cities.

Israel’s ongoing political situation is contributing to the chaos featuring a government that deals with the political and legal survival of the prime minister. A Minister of Internal Security who is trying to gain popularity in the Likud and in the Prime Minister circles by bravado and a Commissioner of Police who do not have the experience and training to deal with complex situations that have no violent solution. Racist and fascist extremists in Israeli society who became part of our legislature with the help of the prime minister are fueling the flames on our streets.

Of course, the Palestinian side must shoulder their share of the blame. Particularly disappointing is the lack of moderating leadership who will calm down the riots in the Arab cities within Israel.

As usual most of us, including many of my good friends stand by the flag when Israel is attacked and accuse me of focusing my criticisms on our side. They complain that I do not show patriotism when my people are under missile attacks.

My answer is that the establishment of our state and the realization of the Zionist dream require taking responsibility. We can engage endlessly in the pointless blame game like children in kindergarten who fight and tell the teacher that the other has started the fight.

I have no interest in the blame game, I have an expectation that we as the strong and sovereign side will take responsibility. Responsibility means learning from our mistakes and stop looking for faults of the other as an excuse. The core element of Zionism was turning Jews from victims of history to those who shape it. The way to do this is not by engaging in the mistakes or evil of others, but by behaving like a responsible adult. Not as a brat in a street brawl.

The Israeli government should have a comprehensive policy for the Palestinian issue, centered on strategic diplomacy with the Palestinian leadership dedicated to finding a solution to the conflict that will free us from repetitive futile patterns. At the same time, we must promote true equality for Palestinian citizens of Israel. Otherwise, the vacuum that our government creates will be once again filled by the extremists.

Analysis by Nadav Tamir, executive director of J Street in Israel and as adviser for international affairs at the Peres Center for Peace and Innovation