The banality of Evil refuted 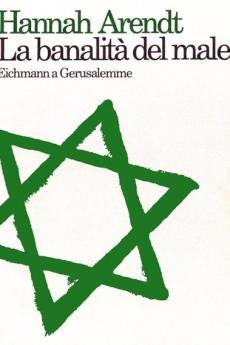 The cover of the book

Protagonists: The lesson of the jurist, recently passed away, who fifty years ago presided the trial against the man who organized the Holocaust

The banality of Evil refuted

Landau, the judge who sentenced Eichmann and challenged Arendt’s arguments

Moshe Landau deeply believed in the independence and impartiality of the bench. When I met him at his home ten years ago he complained about the behaviour of some judges who loved to release public statements. He said: “A judge performs his job in court alone, otherwise he runs the risk of losing his credibility. He must seek the truth as trials unfold, not facile popularity with the public”.

This spirit guided him in the course of the Eichmann trial. Since the very first day he committed himself to not letting it assume a propagandistic feature, and instead established solely whether or not the accused was guilty. This is why he asked prosecutor Hausner to to limit the pieces of testimony which gave a drawn-out description of people’s suffering: “I am aware that it is difficult to interrupt certain pieces of testimony, but I think it is your duty to explain to the witnesses that they must focus only on the topics that are relevant to the trial”.

In sentencing Adolf Eichmann to death, Moshe Landau refuted the arguments advanced by the Nazi criminal in his defense, i.e. that he would have merely “obeyed orders”. He wrote in the verdict: “Even if we had found that the Accused acted out of blind obedience, as he argued, we would still have said that a man who took part in crimes of such magnitude as these over years must pay the maximum penalty known to the law, and he cannot rely on any order even in mitigation of his punishment. But we have found that the Accused acted out of an inner identification with the orders that he was given and out of a fierce will to achieve the criminal objective, and in our opinion, it is irrelevant even for the purpose of imposing a punishment for such terrible crimes, how this identification and this will came about, and whether they were the outcome of the training which the Accused received under the regime which raised him, as his Counsel argues”.

Reflecting on that verdict of his I asked Landau what he thought of of Hannah Arendt’s Eichmann book and her arguments against the banality of evil. I wiah I had never done so! Just by mentioning the philosopher from Hannover I ruined my own good name. Moshe Landau looked me askance and told me he had harshly argued with Hannah Arendt at the home of Kurt Blumenfeld, the President of Germany’s Zionist federation until the rise of Hitler. “Eichmann had the Jews killed with a fierce determination. It was anything but a dull task for him... He loved his work with all his heart. He behaved that way because he thought like a Nazi, not because he was unable to think”.

Weekly “Der Spiegel” has recently published some documents that seem to confirm Moshe Landau’s remarks. In the wire tap of a conversation he had with some of his Nazi friends in Argentina before his arrest, Eichmann regretted not completing his task: “We haven’t carried out our task properly”, he said. “We could have done a lot better”. And then he added: “I was no ordinary recipient of orders. f I had been one, I would have been a fool. Instead, I was part of the thought process. I was an idealist”.

In his latest book Worse than war, Daniel Goldhagen challenges Hannah Arendt’s arguments by reminding us that the true Eichmann was deeply anti-Semitic and proud of being so. He himself confessed to some Nazi friends that he had been motivated by an inner determination: that was the origin of his fanaticism. “When I reached the conclusion that treating the Jews the way we did was necessary, I worked with all the zeal that a man can expect from himself. There is no doubt that I was considered to be the right man in the right place… I always performed hundred percent, and I wasn’t certainly weak at issuing orders”.

Still more significant, reminds us Goldhagen, is the fact that Eichmann bragged about the millions Jews he had killed. A few months before the war’s end he told his deputy commander: “I will laugh when I jump into my tomb, thinking that I killed five million Jews. It makes me very satisfied and pleased”. Are these – the author wonders – the words of a bureaucrat who carries out his task without thinking, without reflecting, and without holding a particular opinion?

So, was Hannah Arendt wrong when she described the Nazi villain as the symbol of those men who commit the worst crimes without asking themselves any moral questions?
Actually, the philosopher in her book tried to put forward a new point of view regarding those guilty of extreme Evil. “The Nazi actions were atrocious, but those who perpetrated them were nearly normal, neither devilish nor atrocious”. This way she meant to underline that mass murders in the different forms of totalitarianism were not planned or carried out by people who felt a taste for Evil, but by ordinary human beings. This is the intuition of the banality of evil, a hypothesis that is far from reassuring, like writer Vasily Grossman underlined while analyzing the informers who sent people to death. Grossman pointed out that Evil was perpetrated by seemingly decent people.“Do you know what is most disgusting in informers? The evil inside them, you will think. No! The good in them is really terrible: the saddest things is that they are full of dignity, they are virtuous people. They are tender and loving fathers, sons, and husbands, people able to perform good deeds, to be very successful at work”.

Eichmann, as Arendt had pointed out during the trial, had tried to present himself as an irreproachable bureaucrat, who zealously obeyed orders and abode of the law of his time. In the course of the years though, a misunderstanding about the philosopher’s thought has arisen. to many of her critics, especially in Israel, it seemed as though the concept of banality of Evil could be applied only to a category of people: those who turn away when facing crimes and execute terrifing orders without reflecting. Those who instead is convinced of an eliminationist ideology (as Eichmann surely was) is not included in the typology described by Hannah Arendt.

Instead, in the philosopher’s opinion, those who are seduced by the siren song of an ideology which sets out the elimination of an “infectious” part of the human kind as a means to achieve the happiness of humanity and believes the world can be explained by an idea of pure fantasy applied to reality is surely included in the number of people who give up thinking.

Eichmann was multi-faceted: he behaved like a bureaucrat deferential to power and at the same time he was a convinced supporter of the mission to which Hitler had called him, i.e. the elimination of Jews. In any case though, he had closed his mind to all kinds of compassion, judgement and moral apprehension: he was ordinary, although he believed in what he did. This is probably what the extraordinary judge of the Eichmann trial, who passed away a few weeks ago, precisely on the anniversary of the trial of which he was the protagonist, had failed to understand.

If you want to leave a comment please write to redazione@gariwo.net we will publish the most significant passages of the discussion.

The article in the Corriere della Sera