The Ambitions of Vladimir Putin 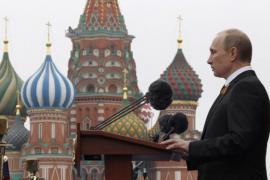 Vladimir Putin in front of St. Basil's church in the Red Square

From Putin’s role in the negotiations of the Syrian crisis to the next Olympics of Sochi, the continuing protests in Ukraine and the reawakening of Russian nationalism, Moscow today is at the center of international affairs. We asked Francesco Bigazzi, a journalist, to comment on the ambitions of president Putin. Here is what he told us.


There has been talk of the protests in Ukraine for some days now. What is happening in Kiev? What do you think of these demonstrations and Putin’ comment, which described the protests as an “anti-Russian pogrom”?


The protests happening in Kiev are legitimate, because they show popular discontent towards a president, Viktor Yanukovich, who has always taken extremely brutal actions against all opposition.  These are important protests for Ukraine, which has finally found the courage to protest and hold demonstrations public. Naturally the relationship with Moscow is very complicated, because if on one hand Yanukovich is a nationalist of Soviet the old guard, on the other he is searching for support from Moscow by suppressing all internal liberties. Many scrutinize Putin’s comment; I believe that the Russian president is not completely able to consider these protests as an anti-Russian pogrom, since at the demonstrations people take part in the most democratic layers/parts of Ukrainian society.


In the news arriving from Moscow there is a sense that Putin is trying to create a new national ideology, based on the legend of Grand Russia...thinking to the example of the introduction of guidelines for a sole history textbook for schools that in some ways redeems the figure of Stalin. Of those types of initiatives, what are they about?


Putin is interested in creating a union between the whole Slavic population in the east, aimed not only at Ukraine, where around 80% of the Slavic population resides, but also Estonia, Latvia, part of Lithuania, not to speak then of Kazakhstan.
And in this process re-enters his strong alliance with the Orthodox Church. Putin is attempting to be the new unifier of the Slavic world, and he is doing so from a position of strength-fundamentally economic. The Customs Union wanted by the Russian president is also apart of this plan. After the collapse of the Soviet Union, Moscow accepted to keep united the most loyal communist countries in the Community of Independent States. This structure above all had no function, and now Russia’s attempt to reestablish it on a much more solid and concrete base as the Customs Union. It is clear that the intention is, to a certain extent, to strengthen that which remains of the ex-Soviet Union.


How is Russia preparing for the next Winter Olympics?


This is a very interesting moment for Russia. The country is experiencing a period of internal revolution, although very little abroad know, it is a important fact, above all amongst the youth. Under Putin’s authoritarian regime, for the first time a bourgeoisie being created that is outing diverse forms of opposition in action, more democratic. Until this moment the Russian opposition existed and was present, but it was divided and fragmented in diverse groups-the Bolsheviks, Kasparov, the extremists-and so it lost credibility. Now instead there is a united opposition, more silent and that demonstrates with less spectacular actions....But something is moving, and the Olympics will be the occasion for this new Russia to emerge.


What do you think of Putin’s new phase of foreign politics, started in he negotiation in the Syrian crisis?


Putin is very experienced, and he is using the empty political resolutions from the fragility of Barack Obama. It is clear that from the inadequate determinations of the American president comes a favorable situation for the Russian leader. Putin knew to take how to take advantage of the Syrian situation in a masterful way, and now he is gaining from the void left by in part by European disengagement and also due to the choice of the Americans to remain self interested and to think less about international politics. The ambition of Putin has made Russia regain the role of planetary power that it had lost after the collapse of the USSR and the fall of communist. It is not by chance that, after many years, for the first time this year the cost of armaments has quadrupled.