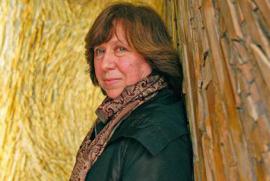 A writer and an essayist, half Ukrainian, half Belarusian, Svetlana Aleksievic ha won the 2015 Nobel Prize for Literature"for her polyphonic writings, a monument to suffering and courage in our time". Last year, Anna Maria Samuelli and Pietro Kuciukian met with the writer in Milan seizing the occasion of the presentation of her book Second-hand Time: The Demise of the Red (Wo)man, published in Italy by Bompiani with the translation by Nadia Cicognini and Sergio Rapetti.

Following is the interview realised during that encounter:

The talk with Svetlana Aleksievic appears today as particularly significant, in the light of the last attacks carried out by the official organ of the Writers Union, “Literaturnaja Gazeta”, to the work by Solzhenitsyn, “Gulag Archipelago", which made the world aware of the horror of the Soviet concentration camps. The new militarisation and the enhancement of ultranationalist patriotism feed the process of “nationalisation of memory”, whose effect in Russia today, besides the erasing of the material signs of historical memory, seems to be the shrinking of the image of dissidents. But even more serious appears the fact that the narration of the horror of Gulag is judged by Poljakov, the newspaper's director, more similar to a creative novel than to any testimony or description of reality. The goal of all this is to stop people from talking about the Gulag and remembering the victims of Stalinism. At school, said Svetlana Aleksievic, there is no talk about nor invitation to happiness, but rather a warmongering talk and mental attitude.

You are a voice of “dissent”,  before and after the fall of the USSR, a dissent that cost you being exiled. What kind of hopes do you nurture today in the opportunity to influence the younger generations in the former USSR? Could you give us any further insights about your statement: "Being dissident towards the people is more serious”?

Over the recent years situation in Russia has changed a lot, above all after Putin showed his intention of defending militarily Russia's interests in the Ukraine, and a new situation has unfolded all over the world. After nearly 12 years in exile I got back to Belarus and I found myself precisely living this situation. My country, Belarus, is joint with Russia and it would collapse if Putin ceased to support it. I, who have written 5 books in 30 years, after coming back was labelled as "national-traitor". My book go against the nationalist myths and are seen as harmful. 87% of the ballots in Russia go to Putin and his idea of “great Russia”. Stalin's rehabilitation started with propaganda books and movies precisely from here. This transformation occurred over a long period of time and us pro-democracy activists, persuaded that it would be impossible to go back, did not realise it! The ones who keep believing in the ideals of the West are now a tiny percentage. On the Web my books are very sharply criticised, I am put against the wall, I receive threats: "Great Russia has always existed, you are a traitor"! Some plasterboards condemn writers, scholars, musicians, educated people by pointing to them as "friends of the junta", the military leaders of the Ukraine. Many people boycott concerts and conferences, and this is very serious, as they do so with the support of the whole population. It is worrisome that today it is the people who are against you ideas. It is normal to be dissident towards power, but it is more serious if you are towards your own people. In the Soviet times we had and felt the support of the people, now not! It is difficult to influence young people because they seek something new or old to believe in and Putin gave back to the people the dream of being a great nation.

Our association Gariwo stemmed from the memories of a Jew, Gabriele Nissim, and an Armenian, Pietro Kuciukian. In many parts of your book you talk about refugees, exile, and in a chapter you speak up for the victims of the pogroms in Baku and Sumgait. In the voice of the Armenian witness we hear the loss of a world of beauty and good, where an Azeri man and an Armenian woman could love each other and plan a future together. How do you feel about this piece of testimony? Did you collect others?

It is the ruin of the USSR of nationalities: Azeris against Armenians, Tagiks against Russians, Chechens against others.. I collected many pieces of testimony from refugees in Moscow, but this is the "strongest" one, if I can say so! But what struck me the most was the lack of hatred on the side of the protagonist, who feels that the two peoples are experiencing the same drama. Everything is bound to repeat itself.. I remember my Grandma wo referring to the pogroms of her past said: "And yet we were close to each other, we drank together!". I interviewed the Armenian lady all day, she was educated, beautiful, had very humble jobs; her daughter was inclined to go further with her studies, but was not allowed to do so. They were paperless, and gripped by fear. In the end we cried together. She said: "There are so many in my situation, many Armenians and many Azeris, too"! She did not hate them.

Do you still nurture any hope for the future of Russia in a reality that you defined as "militarised"?

You say hope? This situation is not going to end soon! The party of war has won, to which also the nationalists, patriots and the Church have added up. So far as Putin is on power, nothing will change and he will be followed by a loyal henchman of his.

I lost many friends, democratic intellectuals who do not agree with me anymore!

You said: “us minority of democratic intellectuals have not been able to accompany people in the process of change after the fall of the USSR”. Did we in Europe and the West by chance fall short of our task of helping you?

Distance help is also possible! The West and America have always seen us as foes. And today it is Putin to say the West is a foe. And yet we could have done more! We gad to talk to the people like in Poland! We did not worry about changing the mentality of the homo sovieticus! In the key moment, for example in El’cin, politicians stood still and wasted time. We were unable to accompany the people towards change. The power exploited our weakness and connected directly to the people. There was so much propaganda. But where are conscience and responsibility? There is a lot of madness, and a lot of cruelty, too. The people's suffering did not turn into chances of freedom.

We deal with "memory", the memory of evil interwoven with good, and the memory of those, faced with the executioners, said no, reacted, kept their own self-respect and dignity. Memory in the former USSR is being erased day by day. We remember the museum of Perm, the commitment of Memorial, of Mr. Razumov with his precious work on the "recovered names" in Levashovo. How to keep and defend what you defined as "precious little islands of memory"? How to defend yourself from those who want to “steal” memory? A book like yours surely helps, but what else can we do?

Today memory is erased. My books are not published in Belarus. Memory cannot and should not be made a state asset. It is a society's "good health". Today we are stolen it. This is why I chose to enter homes, families, the very souls of people, giving them back the life of the "little man" of the Great Utopia. These voices do not have to be silenced! Each of them cries their own truth! The only precious thing is memory, and it is worth more than many history books. I gather the voices and it is as if all these voices, these words composed a dialogue among people. And I am not judgemental. To me, these values are those of humanity. The memory of good, this is important. Good and evil are interwoven, but the important thing is that good deeds emerge. Speeches are no use, it is the expression of good that really matters. Not a collection of horrors, but a collection of souls!