testimony born before the US Senate 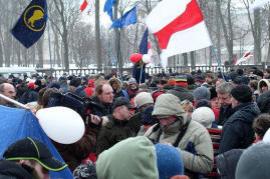 Freedom House Executive Director David J. Kramer testified yesterday before the Senate Subcommittee on European Affairs about the violence and egregious human rights violations that occurred in the aftermath of last month’s presidential elections in Belarus and the possibility of increased U.S. sanctions against members of the Lukashenko regime.

Following the election, which was marred by irregularities according to observers from the Organization for Security and Cooperation in Europe (OSCE) and the U.S. Embassy, security forces arrested hundreds of activists, including seven of the opposition candidateswho ran for president, who protested the official claim of Mr. Lukashenko’s victory.

The other witnesses included Senator Richard Durbin, who recently traveled to Belarus, Assistant Secretary of State for European Affairs Philip Godon, Deputy Assistant Secretary of State for the Bureau of Democracy, Human, Rights and Labor Thomas O. Melia, Kenneth Wollack, President of the National Democratic Institute, and Natalia Kaliada, a Belarussian asylum seeker who was arrested in the December crackdown.