author of a shocking video about his detention 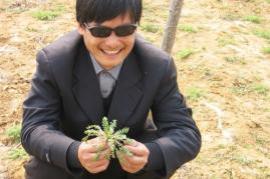 Chen Guangcheng is a blind lawyer who faces hardship to help disadvantaged people, above all women forced to undergo abortion by the one child policy. He served a 51-month jail term.

Now he is under house arrest and he decided to report his situation by shooting a shocking video which was watched everywhere in the world. In the footage Chen says his house is patrolled in shifts by more than 60 agents, who often threaten him. "We are more eager to kill someone than to be scolded by an upper authority", he was told by one of these policemen. "We will beat you up and no one will care", added another one. After the release of the video such threats were kept: Chen was beaten up by the gards surveilling his home. He and his wife were denied the right to reach a first aid post after the beating.

Chen, who is a self-trained lawyer since China discriminates the disabled from accessing the liberal professions, drew the attention also of Hillary Clinton, who told Obama about his case after her State visit to China last month. The Christian association China Aid says it received the video from "a reliable governmental source appalled by what is happening to Chen".