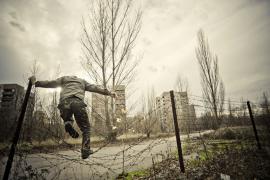 Russian President Dmitry Medvedev and Ukrainian President Viktor Yanukovych attended a commemoration ceremony at the Chernobyl plant, where a reactor exploded in 1986.

25 years go a bunch of brave men called the liquidators faced nuclear damage and death to clean up the plant area. There are different theories about the causes of the accident: some point to Soviet competition with the West. Surely, Moscow failed to inform the neighbouring Countries about the radiactive fallout and repressed in many ways those who tried to denounce its effects on public health.

This was particularly the case of Vasily Nesterenko and Yuri Bandachevsky, two exemplary figures who have faced internment and censorship for trying to make people aware about food contamination and other realities hidden by the Soviet and Belarusian regimes.