Belarus, 25 people will be tried

for electoral protests in Minsk 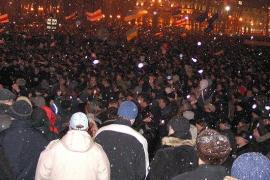 Update 22 January
25 people will be arrested for the post-electoral protests in Minsk. The site of Vesna human rights group informs that: "23 defendants are in jail and two have signed a commitment not to leave the town. 4 former presidential candidates, Andrei Sannikov, Vladimir Neklyayev, Nikolai Statkevich and Alex Mikhalevich, are held in the detention centre of the Belarusian secret service. Last week the court rejected the plea of release of Sannikov, Neklyayev and the leader of the Unitarian civil party Anatoly Lebedko. In Kgb jails there are also Sannikov's wife, journalist Irina Khalip, political analyst Alexander Feduta and an advisor of the Presidential candidate Vitaly Rymashevsky, Mr. Pavel Severinets. A Minsk tribunal sentenced journalist Barjs Haretzki to 14 days in jail for taking to the street after the 12/19 elections.

Sannikov and his wife are risking to be stripped off parental custody for their three years old son. This was reported in the New York Times according to which Belarusian authorities would be investigating also the conditions of little Daniel, who now lives with his grandmother, and with to make a decision by the end of the month.

Rymashevsk, another defendant in the trial, was released some days ago together with the man in charge of Neklyayev's campaign, Mr. Andrei Dmitriyev.

Lukashenko has authoritarianly led the Country for 16 years. In the past weeks the opposition had denounced flaws and fraud in the electoral process.

According to the official data, the President obtained 79,7% preferences. The announcement of his victory sparked protest demonstration and hundreds arrests. The opposition stated that seven out of its nine candidate at the same presidential vote have been held.

Among the detained we mention Nikolai Statkevich, Grigoriy Kostusev, former Foreign Minister Andrei Sannikov and his wife. The BBC denounced the handcuffing of Vitaly Rymashevsky. A fifth election candidate, poet and dissident Vladimir Neklaev, was instead hospitalized last night for fainting after being assaulted, together with a hundred followers, by plainclothes agents with the face covered by black balaclava caps.

OECD (Organization of European Cooperation and Development) defined these elections not free, after denouncing flaws in the past three ballots.