but masterminds are still unknown 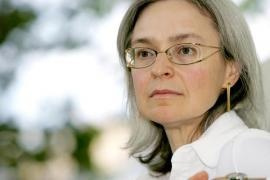 Rustam Makhmoudov, charged with the murder of Anna Politkovskaya, was jailed in Chechnya. The Russian journalist who used to criticize Putin and the Kremlin had a tree dedicated to her in the Milan Garden of the Righteous Worldwide. She was killed in Moscow on October, 7 2006.

n December 2005, during a "Reporters without Borders" conference in Vienna on freedom of the press, she stated: "Sometimes, people pay for voicing their opinions out loud with their lives ". She said that she considered herself "someone who describes what happens to those who cannot see the events " and she denounced Putin’s attempts to intimidate the press and limit freedom of speech. She knew her reports and her counter-information work were putting her life at risk but she refused to be gagged.

A trial against alleged murderes of the reporter had already taken place in Moscow in the past years, but it had yielded no results. The journalist's son had considered the choice to hold the trial in closed doors as unfair and there had been other arguments about procedural flaws.

On the memorial stone dedicated to her in Milan stands the writing:To Anna Politkovskaya assassinated in Moscow for denouncing the massacres of civilians in Chechnya. Many books have been published about her, and also a famous theatrical show entitled Non reeducable woman, taken on stage by Ottavia Piccolo.