China between detentions and dissent movements 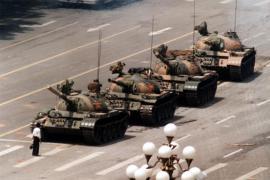 In the night between 3 and 4 June 1989, the tanks of the Chinese army entered the Beijing streets with the order of emptying Tiananmen Square drom the thousands protesters who had occupied it for over one month. It was a matter of a few hours. At 5.40 of 4 June the square had been emptied, the protest repressed, the dream of reforms and democracy crushed.   25 years on, what remained of the Tiananmen Demonstrations? The governments fears the celebrations of this 25th anniversary, and has already started a crackdown on Web users and activists. It is impossible, at least officially, to talk about 4 June.


For some days a "4-June yuan" banknote with the ideologram of the date of the 1989 protests stamped on has been circulating, though. They were conjured up by activists and are now wanted by the police, that ordered their confiscation.


Always to mark 4 June 1989, a call has been spread over the Web to wear a black piece of clothing, sign of mourning and symbol of the black t-shirt worn by Wang Dan, on of the student leaders in those days of revolt.


The authorities answer by suggesting to put on light clothes against the hot weather. The Chinese dissent thus was not put out in 1989. Despite the economic growth and enhanced government control that reduced the demand for reforms from within society, there are still some protest movements.


Differently from those of 1989, though, dissidents nowadays have modified their strategy; no more front clashes with the regime, but the growh of different branches of social activities targeted at change. So here is the New Citizens Movement, then there are plenty of chiaritable non-profit organizations and groups of lawyers and legal professionals defending civil rights.


Most young people, though, totally ignore the existence of the 1989 protests, and many of those who have heard of them are not aware of the divisions that were there inside the party between those who encouraged the demonstrations or consider the protests as a far event that is not able to awaken their interest.


Schoolbooks do not mention 4 June, and it is impossible to find that date also over the Internet. This blockage nonetheless is easily got around by activists, who use the term "35 May" to mention the anniversary. The government is cracking down heavily on the activists remembering it. The authorities enforced harsher measures, like dozens arrests of lawyers, professors, activists and bloggers.


The most outstanding case, other than that of journalist Gao You - arrested for "spreading state secrets" - has been the detention of four people accused of "sawing disorders" and whose only crime was participating on past 3 May in a (private) seminar to remember Tiananmen Square.


To this we may add the steady surveillance of the police on the homes of the activists' relatives, the control over communications, the restraints imposed on dissidents - like Ding Zilin, founder and spokesperson of the Mothers of Tiananmen Square, now under house arrest. The regime fears this anniversary, and this crackdown on dissent proves it. The demands of the youths of 1989 - struggle against corruption, more democracy, more human rights, more participation in public life and more transparency,  have not been met yet. This is why the goverment is trying to crush the demand for freedom of the Chinese people. Hong-Kong will thus be entrusted with remembering Tiananmen, and for the occasion it will be illuminated by thousands candle which will be lit in Victoria park. Exileees and democrats together will remember that "the light of hope is still on", 25 years on.