the repression in China goes on 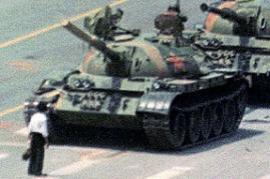 The icon picture of the resistance on Tiananmen Square

The silence of the authorities on the massacre of Tienanmen Square of 4th June 1989 goes on. The death toll is still covered by State secret.
The controls on activists and dissident have been tightening. On the Chinese Websites the censorship systematically deletes every reference to the students' and people's demonstrations of those days.

The voices of the Tienanmen Mothers, persecuted by the regime, jailed, put into house arrest, controlled at sight and subject to continuous threats, resist. Led by Ding Zilin, on 26th February 2009, as the repression anniversary approached, they called the National People's Congress of China for restoring the truth and rehabilitating the victims.

Publication of "Captive conversations", the memoir recorded and secretly sent abroad by the now dead reformist leader Zhao Ziyang, who interveneed to prevent from the repression and was purged from the regime.


BBC - Video of the Tiananmen Massacre