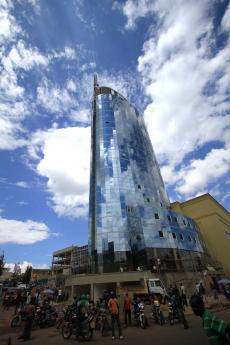 21 years have gone by since the shooting down, in the night of 6/7 April 1994, of the plane of President Habyarimana, that started genocide in Rwanda. There were over 1 million victims, in just a hundred days.

Today the Economist defines Rwanda's President Paul Kagame, elected in 2000, as one of the most successful leaders in Africa, able to turn Rwanda into a modern and innovative country, with a steadily growing GDP (+7%) mainly thanks to produce and real estate - and able to rely on an important inflow of foreign capitals. Its entry into the financial market is proven by the Kigali City Tower, a modern skyscraper which is a symbol of renewal.

“I came back to my homecountry for the first time in 1995 and it was a real shock - told us Francoise Kankindi, Chair of Bene Rwanda - last year. Then I was there when my son was born, and I found a country that was struggling to rise again from the debris of genocide. I was in Rwanda the last time in August, and I felt proud of being Rwandan, of getting back home, to let my son see a rebuilt and pacified country. Today in Rwanda we feel life throbbing, and it is from here that we have to restart”.

Rwanda thus presents itself as third African power, a country looking at the future and reconstruction. But what is the role of the past in this process, above all among the younger generations that have not experienced genocide? How do people explain the genocide of the hutus against the tutsies to the young boys and girls?

Talking about genocide in the aftermath of 1994 was not easy. At the end of the violence, the percentage of orphans whose parents were killed during the hundred days was very high, and victims had to go on living side by side with their executioners. The process of reconciliation, however, was really focused on education, which was considered as a top domestic priority: in the years Two-thousands the public education system was profoundly reformed, and fee and compulsory attendance for 9 years was introduced. At the core of these changes there were above all the school schedules, strongly marked by the ethnic division between hutus and tutsis before 1994 - it suffices to notice that teacher often had the pupils stand up asking them to identify themselves with an ethnic group.

The problem of post-genocide education, highlighted by a group of experts in 1995 - that underlined more and more the need to totally revise the textbooks - led to the temporary suspension of history teaching. Talking about genocide was not easy, also due to the lack of a specific term in the local language,kinyarwanda. In fact, the generic word itsembatsemba (extermination),failed to express the idea of a deliberate intention to totally annihilate an ethnic group. Only since 2008, the year in which Kagame inaugurated numerous constitutional reforms, the specific term of “genocide against the tutsis” has been introduced.

Despite these achievements, the textbooks withdrawn in 1995 have not been reintroduced yet, and the teaching of the history of genocide is entirely up to the teachers, who follow ministerial directives aimed at urging a commitment to the "memory policies" through the screening of movies and documentaries and teaching guidelines focused on patriotism and the common history of the country.