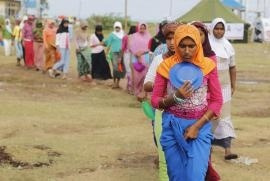 In may 1939, ship SS St. Louis, with 1,000 Jews fleeing Nazi Germany on board, was rejected first by Cuba and then by the United States, and forced to go back to Europe. Over a quarter of the passengers would then die in the Holocaust.

This is the image to which Israeli daily Haaretz compares the travel by the sea of the Rohingyas to escape their desperate conditions, in what the US Holocaust Museum and Memorial based in Washington did not hesitate to call as genocide.

Rohingyas are one of the most persecuted minorities one earth, a true "stateless people”. Stemming from Rakine, a territory of Western Myanmar at the border with Bangladesh, they are of Muslim faith, and are not recognised by any country. Myanmar, a country whose majority (80-90%) is Buddhist, excludes them from the 130 ethnic groups recognised in the Constitution, while Bangladesh itself, where some Rohingyas found shelter, does not award them citizenship, and instead is not even more able to host them. Bengali prime minister Hasina himself defined them as "mentally ill", accusing them of tarnishing the image of the country in the world. In Myanmar the Rohingyas face abuse and discrimination on a daily basis: they are not granted freedom of movement, they are subject to arbitrary arrests, good seizures, physical and psychological violence. From when the Rohingyas were denied citizenship in 1982, persecuting them has nearly become an official practice.

The very Buddhist monks are bringers of a message of intolerance toward this people. In Myanmar in fact there is the so called 969 Movement, a group preaching religious purity, the stop to mixed marriage and the boycott of the Rohingya shops. The movement's leader is Ashih Wirathu, a monk accused of inciting to hatred against the Muslim minority - whom Wirathu considers as the people behind a plot against Muslim rule in the 21st century. Activists consider him as a neo-nazi, and in 2013 Time  defined him as “the face of Buddhist terror”, comparing him to Osama bin Laden. About the Muslims, Wirathu often said that “You can be full of kindness and love, but you cannot sleep besides a rabid dog”.

Violence against the Rohingyas, which were condemned also by the Dalai Lama, “have a genocidal intent - said Muang Zarni, a Burma activist based in London - in the sense that Muslims are considered as bloodsuckers in our society, exactly like the Jews during the Third Reich”.

This people has been in the spotlight before the international community since 2012, following a wave of violence that caused nearly 180,000 refugees -  of whom over 100,000 are children. Besides Bangladesh, these migrants head for Thailand, a big hub of human trafficking, where they are often compelled to work on the fishing boats in conditions resembling slavery. Recently the conditions of the Rohingyas fleeing Burma has even worsened.

Scared by the crackdown of the Thai government - embarrassed for the recent discovery of mass graves -, in facts, human traffickers started abandoning migrants go adrift on the boats, thus turned into floating coffins.

According to the UN, from January to March 2015 nearly 25,000 refugees left the Bengala gulf. A few days ago began the first landings and sightings in the open sea in front of the coasts of Indonesia and Malaysia, giving rise to a ping pong match between the receiving countries: no one wanted to deal with the issu, and Myanmar refused to take back the Rohingyas. This attitude drew the criticism of the Vice minister of Interiors of Malaysia, who accused Myanmar of "treating its own citizens as trash, to then dump the problem on the shoulders of the neighbouring countries”.

After an initial resistance, Malaysia and Indonesia accepted to rescue the migrants, but only on a temporary basis and only those who have already landed or are at sea - thus rejecting all those who will embark in the future. Malaysia did not sign the international conventions on migrants (like the Convention of Geneva of 1951, defining the condition of refugees) but already hosts over 150,000 refugees; job opportunities, however, are limited, because the refugees have no legal status nor access to education whatsoever. Malaysia and Indonesia thus agreed to the rescue operations upon condition that migrants are deported back into their countries of origin or taken to other countries within one year. For nearly 3,000 migrants, thus, the ordeal of their see escapes will be followed by an administrative limbo. Also those who succeed - with procedures made more lengthy by the huge number of requests received by UNHCR - in obtaining refugee status, will have to wait for longer before being moved to another country and be able to start life anew.

These procedures seem to remind of those in another migration-related emergency, the one in the Mediterranean. However, while - even under limits and difficulties - the European Union is getting organised to effectively cope with the crisis and distribute fl the migrants fleeing from North Africa and the Middle East among its member states, the member states of the ASEAN (the Association of South Eastern Asian countries) are very reluctant to deal with the debate on human rights. It should be noticed that, even if we admitted - like Burma - that the Rohingyas are a minority of the country, this would not justify the intolerable persecution against them.

This persecution is perpetrated-  with silence from or the tacit support of - the Myanmar authorities. Very often, former genera Thein Sein proposed a mass deportation of the Rohingyas, and also Aung San Suu Kyi was ambiguous in this respect.  After the 2012 outburst of violence, in facts, the Peace Nobel Laureate often avoided mentioning the Rohingyas in official speeches, referring to them generically in terms of "Muslims" and simply inviting people to "respect law and order". Many believe that this stance of her is linked with Aung San Suu Kyi's presidential ambitions in sight of the elections that will be held in November 2015; surely this attitude has disappointed those who saw in this woman an important reference point for the defence of human rights. “If you keep neutral in a situation of injustice - said Peace Nobel laureate  Desmond Tutu - you automatically take the sides of the oppressor”.

The Dalai Lama himself has thus invited The Lady to a greater commitment in favour of migrants. "It is not enough to ask yourself 'How can I help this people?' he appeared to have said. Lately the humanity lacks concern for the lives of the others”.