"Those who deny do not really ignore" 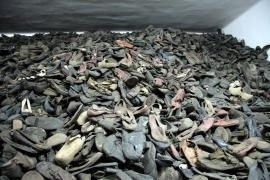 After a long passage through the Senate, the Chamber of Deputies approved the law that introduced into the Italian criminal code the crime of Holocaust denial – on the wake of other European countries such as Austria, Belgium, Germany, Portugal, France, Spain, Sweden, Lithuania, Poland, the Czech Republic, Slovakia, Romania, Hungary and Luxemburg.

Thus jail terms from 2 to 6 years are provided for those guilty of propaganda, abetting and incitement to hate based “totally or in part on the denial of the Holocaust or of the crimes of genocide, crimes against humanity and war crimes " as defined by the International Criminal Court.

Genocide denial today is a very broad phenomenon, that has changed over time as far as not really its contents, but rather its communication channels are concerned. Today this phenomenon finds a fertile soil above all on the Web, the public space, which is more visited by the young people and where data research and analysis, and critical evaluation tend to dissolve. In an era of “free-responsibility will” – as defined by Giuseppe Laras, President of the Rabbinical Court of Central and Northern Italy - and systematic suspicion, denial finds in the Network a very strong means to spread. We talked about it with Donatella Di Cesare, philosopher and Professor at the University La Sapienza of Rome, who followed the law's passage very closely.

It is a delicate matter, that over the recent years has witnessed to the development of a deep reflection on freedom of expression. What do you think?

I took part in the discussion in 2012 with my book, Se Auschwitz è nulla, (If Auschwitz Is Nothing), saying from the beginning that this law was not about limiting free opinions. Holocaust denial, in facts, is no opinion, but rather a political defiance.
Holocaust denial is a political phenomenon, coherent with the past annihilation and headed to the future, in particular to the delegitimization of Israel. Nazis were the first to deny the Holocaust, trying to conceal their crimes, and speaking about Holocaust denial today means speaking of a political project that willingly places itself outside democracy.

If the Holocaust were a fraud, a tall tale told by Jews, it would mean that Jews themselves would have “abused” of such swindle to be able and create the State of Israel – which then would not be legitimate, nor would have any reason to exist.

Talking about those who deny the Holocaust also opens the matter of condemning the denial of other genocide cases – first of all the one against the Armenians, recognized on past 2 June by the German Parliament …

The theme has emerged of comparison with other genocide cases, but actually there is no comparison. If we refer for example to the Armenian genocide, which is a case of genocide, we must remember that except for the Turkish government, this genocide is recognized everywhere. The same cannot be said about Holocaust denial, which is unfortunately a worldwide phenomenon on which we must reflect.. Let us only think of the “state denial” of Iran.

With the success of the Internet, Holocaust denial became more visible. The Web is a powerful means to spread denial theories, but it is not the only soil for this phenomenon to develop. What are the answers provided by the law that has just been approved by the Chamber of deputies?

This law is headed precisely in this direction, offering a protection to the younger people not only on the Web, but also at schools and universities. Italy is a country that does a lot for the memory of the Holocaust, and now it has one more tool to step in where there are teachers who deny the Holocaust. This does not mean to limit research. When we talk about history we do not talk about science, an objective reality. History is a shared narration, and this law does not prevent from going into further detail, and helps us do that instead. I have always said deniers are not researchers, because their ultimate goal is to destabilize democratic society. We must never forget, above all in Italy, that our democracies have been born after Auschwitz, after fascism and Nazism. Those who deny don’t really ignore, they know well what happened, and we cannot legitimize such people.