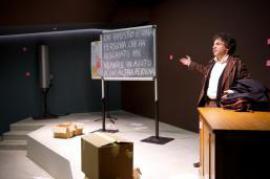 A scene from the show "Il Memorioso"

“We shall not forget, we must make people more and more aware about what was perpetrated in that gloomy past”.

In his monologue, actor Massimiliano Speziani remembered all Righteous people who have risked their lives all over the world to rescue other human beings. It is the case of Aristide de Sousa Mendes, the Portuguese consul who helped the Jews leave France, Dimitar Peshev, the Vicepresident of the Bulgarian Parliament who managed to stop the trains that would deport all country's Jews, or Jan Karski, the "unheeded witness" to the Holocaust.

An evening to say no to racism, to remember the Holocaust and the other genocide cases and to underline the importance of the struggle against indifference.

“The meaning of it - said Gabriele Nissim, Gariwo Chairman - is that of conveying the great moral tension stemmed from our country to the rest of Europe. A few hours after Holocaust Memorial Day I wish to express my gratitude to Italy first of all as a Jew, but then also as a man who has always thought memory plays an immportant role in educating people to be responsible in everyday life. Italy thus has many faults, but there is no other country in Europe where Holocaust Remembrance Day is so deeply felt”.

Together with Minister Kyenge, also members of local and national politics were there - such as Deputy Mayor of Milan Mrs. Ada De Cesaris, the Presidents of City and Provincial Councils Basilio Rizzo and Bruno Dapei, Forza Italia coordinator for Lombardy Mrs. Mariastella Gelmini - but also such personalities as Umberto Veronesi, Fedele Confalonieri and father Gino Rigoldi, to celebrate Holocaust memorial day and remember, as Gabriele Nissim said, that "every man, even in the direst straights, can always choose to do something”.