Testimony of the Righteous in the World

There is Always an Option to say 'Yes' or 'No' 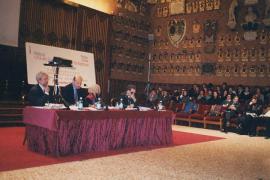 The seminar in Padua, Italy (Gariwo)

Antonia Arslan Gardens of the Righteous Worldwide Committee
The publication of the proceedings of the international conference "There is Always an Option to say 'Yes' or 'No'. The Righteous against the Genocides of the Armenians and the Jews"

Boghos Levon Zekiyan University of Venice
Pietro Kuciukian International Committee of the Righteous for the Armenians - Memory is the Future)
The figure and work of the Turkish publisher Ayse Nur Zarakolu, Istanbul

Svetlana Broz Committee for the Gardens of the Righteous Worldwide, Sarajevo
The figure and work of general Jovan Divjak, Sarajevo

Ayse Nur Zarakolu will receive the «Padova per i Giusti» award, assigned by the Padua City Council, and the Comitato Internazionale dei Giusti per gli Armeni award assigned by Ardavast Serapian, President of the Fondazione Stefano Serapian

Gabriele Nissim Historian, Milan
The reason for our search for the Righteous in all genocides

Stefano Levi della Torre Essayist, member of the Executive Council of the Jewish Community in Milan
The Righteous in the Jewish tradition

Rationale behind the choice of general Jovan Divjak

For his part in the defence of Sarajevo, especially during the siege by the Serb army, for his firm stand against ethnic cleansing, and subsequently for his fight for justice and human rights in support of the victims of hate, the weak and the persecuted from whichever side of the ethnic and political divide; for his struggle to safeguard a multi-ethnic state in Bosnia-Herzegovina and lastly for his commitment to the creation of the Foundation to rebuild Bosnia-Hersegovina through education, which supports child victims and orphans of war, regardless of their ethnic or religious origins, providing them with economic aid, scholarships and training for the job market, right through into adulthood.


Rationale behind the choice of Ayse Nur Zarakolu

This prize recognizes her commitment to human rights through her publishing work in Turkey, a commitment made along with her husband Ragip, at their own personal risk. It also recognizes her efforts, in her own country and abroad, to promote awareness of the historical, social and cultural plight of the ethnic minorities living within Turkey's borders and, specifically, that of the Armenian minority. Ayse Nur Zarakolu and her husband have dedicated numerous publications in Turkish to the subject of the 1915 genocide of the Armenian people perpetrated by the government of the Young Turks. In particular, the prize acknowledges Ayse Nur Zarakolu's active testimony of the Armenian genocide provided by the translation into Turkish, the publication and distribution of fundamental foreign texts on the subject.

Conference "You can always opt for Yes or No"