the speech by Emmanuel Macron 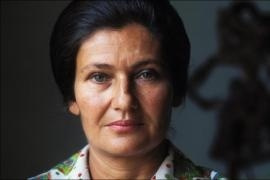 From Sunday 1 July 2018, one year after her death on 30 June 2017, Simone Veil rests in the Pantheon, where the other great names of France are buried, including Voltaire and Zola. It was the will of all the French, who welcomed with immense warmth the entrance of the body of Simone in this symbolic place, where she will  stay with her husband Antoine. On the occasion of the ceremony, the French President Emmanuel Macron gave a very significant speech that retraces the life and struggle of Veil. We publish some extracts and the full french version is available here.

[…] France loves Simone Veil. She loves her in her fights, always for a right cause, always necessary, always animated by the concern for the most fragile, for which she engaged with an uncommon force of character. France loves her even more because she understood from where the strength put at the service of a more dignified humanity came. It was only belatedly, when Simone was more than fifty, that France discovered that her engagement has its roots in the absolute and unspeakable darkness of the death camps. It was there that, to survive, she found in herself that deep, secret, inalienable part called dignity. It was there that, despite the misfortunes and the mourning, she discovered the certainty that in the end, humanity would prevail over barbarism.

[…] In 1948, CASSIN had the United Nations General Assembly ratify the Universal Declaration of Human Rights. Simone Veil knew, however, that in that noble struggle for human rights, half of humanity was stubbornly being forgotten: women. She had seen their subjugation and humiliation, and she herself had faced inequalities that she considered absurd and outmoded. So she fought for justice to women, to all women.

[…] With Simone Veil enter in the Pantheon the generations of women who made France, without having being offered gratitude and freedom that was due to them by their nation. Today, through her, justice is done to them all.

[…] She, who had lived the unspeakable experience of savagery and arbitrariness, knew that only dialogue and concord between peoples would prevent Auschwitz from reborn on the cold ashes of its victims. She became a fighter of peace, she became a fighter of Europe. She wanted Europe by realism, not by idealism; by experience, not by ideology; by lucidity, not by naivety. She was not kind to the irenic faders and technocratic complications that sometimes became the face of this Europe, because she was of that generation for which our Europe was neither an inheritance nor a constraint, but a conquest of every day.

[…] And when she decided to be a testimony of her deportation, it was first to pay homage to the Righteous of France. She rose against those who portrayed a France won by the antisemitic delusions of HITLER, PETAIN and LAVAL, to recall the incredible and spontaneous courage of those French families who, at the risk of their lives, had hidden Jews children, saving them from persecution and an atrocious death. She recalled the time when the French provided false documents and work certificates to their Jewish fellow citizens. It was the time when the Archbishop of Toulouse, Monsignor Saliege, appealed for churches to provide asylum, it was the time when priests secretly celebrated Purim in their churches. It was the time when underground solidarity kept the French fraternity alive.

[…] France, thanks to her and some others, faced what she did not want to see, what she did not want to hear, what she wanted to forget and which, nevertheless, was a part of herself. She understood that the nation must not fear the hurt memory of its bruised sons and daughters, but welcome and embrace it. Simone VEIL never accepted being decorated for being deported, nor did she accept that a rivalry of memories emerges.