Gábor is the founder of Budapest’s civil memorial “Freedom Stage” 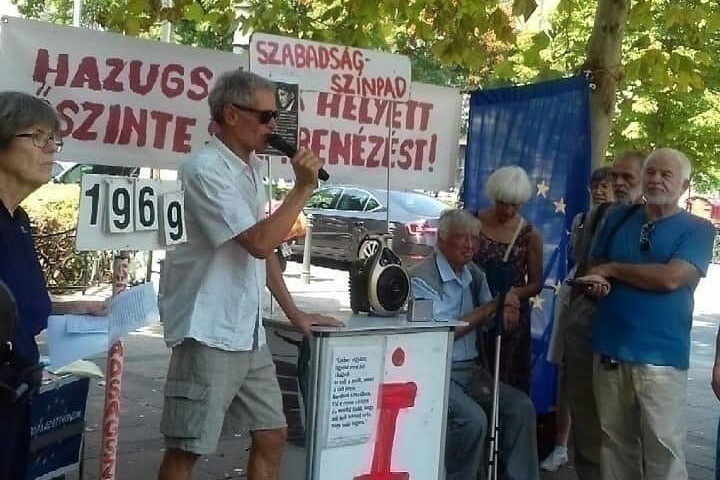 The Hungarian civil activist Sebő Gábor won the 2021 Mária Ember award together with writer István Gábor Benedek, a press release from the Raoul Wallenberg Association announced on Saturday. The award is given annually to those who combat racism, fight for human rights, and contribute to the knowledge of the Shoah as part of Hungary’s history and culture.

Together with his wife Judit Szász, Sebő Gábor founded in 2014 the so-called Szabadságszinpad (Freedom Stage). The Freedom Stage is an initiative that arranges cultural and commemorative events, born as a protest against the Memorial to the Victims of the German Occupation, a monument erected in 2014 in Liberty Square, Budapest, by the government of Prime Minister Viktor Orbán. The monument features an eagle attacking the Archangel Gabriel, symbolizing the Nazi occupation of Hungary. In recent years, the monument was widely criticized by the Jewish community, who argued that the monument distracts from the nation’s role in the Holocaust by portraying Hungary as a victim rather than a collaborator of Nazism. During wartime, hundreds of thousands of Jews were deported from Hungary to Nazi concentration camps.

The Freedom Stage consists of a small stage symbolically located in Liberty Square and of a civil memorial made of objects, photographs, and pictures placed opposite the monument by people who lost their relatives in WWII. Since 2014, the activists of the Freedom Stage have been protesting daily, organizing cultural and commemorative events, and building a civil memorial and a space of public reflection on Hungary’s recent history. On more than one occasion, Budapest’s mayor visited the activists of the Freedom Stage.

The award ceremony, which holds great symbolic significance for Hungary and its struggle to come to terms with Nazism, will take place at a later date.