world events not to forget the Shoah 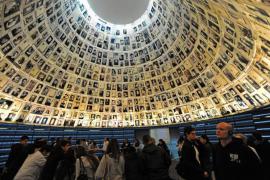 Poem by Holocaust survivor A. Sinkova

I will take off and go alone
Where other people are, better people,
To an unknown place
Where nobody kills each other
Maybe many of us
a thousand, will reach the goal
Pretty soon.


Some of the initiatives to be held in the world for Holocaust Remembrance Day, established to remember the liberation of Auschwitz on 27 January 1945.

•27 January, 10 a.m., Hamburg - Memorial Day for the Victims of Nationalsocialism at the Police Highschool (Polizeihoschschule)

•around 27 January, Paris - see the complete events calendar in the site of the Mémorial de la Shoah.

•27 January, 4.30 p.m., Warsaw - commemoration at the Monument to the Ghetto Heroes followed by ecumenical prayer.

•around 27 January, New York
See the initiatives held by the United Nations here.

Israel commemorates the Holocaust on 27 Nisan (month of the Jewish calendar corresponding to April/May).