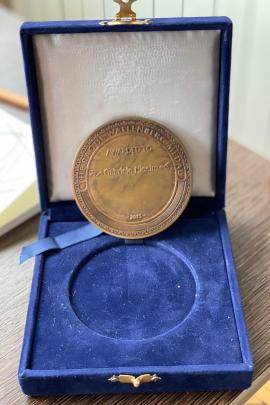 As the Foundation’s website recites, the award "has been established to recognise those who demonstrate rectitude in their conduct […] following the legacy of the saviours of the Holocaust." By recognising the recipient’s exceptional moral character, such a highly symbolic prize honours the memory of the Swedish diplomat to whom the Foundation is dedicated. During the Holocaust, Raoul Wallenberg saved thousands of Jews and others who were being persecuted in Hungary at that time. Following his example, the Foundation develops educational programs and awareness campaigns that are based on the values of solidarity and civic courage, ethical cornerstones of the saviours of the Holocaust.

The foundation’s founder Baruch Tenembaum, in an official letter to the award’s recipient, explained that the board’s choice fell on Nissim for his "tireless commitment to the humanitarian cause in the role of president of Gariwo, the Garden of the Righteous Worldwide an organisation devoted to upholding and divulging the stories and deeds of those individuals who have contributed to humanity’s moral enhancement." Tenembaum added: "the International Foundation Raoul Wallenberg is a multicultural and interfaith organisation, whose manifesto stands by one of Judaism’s main pillars ‘hakarat hatov’, namely ‘recognising the good’. And it is in this spirit that we want to pay homage to all those women and men who were brave enough not to be passive bystanders in front of the atrocities of the Holocaust, the Armenian genocide and other tragic conflicts."

‘As the head of Gariwo - Tenembaum continues - Mr. Nissim shares our agenda in a broader sense, by finding and diffusing the stories and deeds of those exceptional individuals of the past and the present who made a difference by defending our human rights.’

The Foundation also recalled some of the most important campaigns that Nissim, together with Gariwo, carried out, such as the proposal for the institution of a Day of the Righteous - approved by the European Parliament in 2012 and by the Italian Parliament in 2017.

President Nissim declares himself grateful for the prestigious award. "Having Gariwo’s activity recognised on an international level really makes me happy because the Wallenberg Foundation works on the same issues as we do, which is the responsibility of individuals in the prevention of genocides and any form of hatred against minorities, starting from antisemitism. In today’s dangerous world, it is important more than ever that we stand united in defending these values. For this reason, I wish that there will be an even stronger collaboration between Gariwo and the Wallenberg Foundation in the near future."

Due to the current sanitary crisis, the award ceremony has been postponed until a later date, when the conditions will allow.