so Yad Vashem commemorates the anniversary 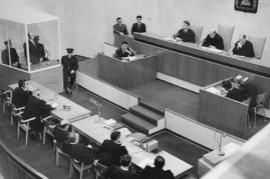 The trial (photo by Wikimedia Commons)

Yad Vashem devotes a You Tube channel to the Eichmann trial, with over 200 hours of court hearings. The Institution also presents a Websites with documentary sources and articles about the famous trial against the criminal captured in 1961 in Argentina and recommends a theatrical show on the trial symbolizing the prosecution of Nazi crimes.


Adolf Eichmann ran the death mechanism of the Treblinka lager, where the Jews of the Warsaw Ghetto were annihilated. He also directed the Terezin concentration camp where prominent, often elderly Jews were interned, deceived about their fate and compelled to play the role of the model detainees skilled in the arts and highly respected by the regime. The final destination, after seizure of their whole goods, was Auschwitz.

Eichmann's behaviour, wrote philosopher Hannah Arendt, was not based on particular cruelty, but on a lack of the ability to judge events and deeds. The architect of the Holocaust, as he was called, thus embodies "the banality of evil".