Why is Erdogan so afraid of Osman Kavala? 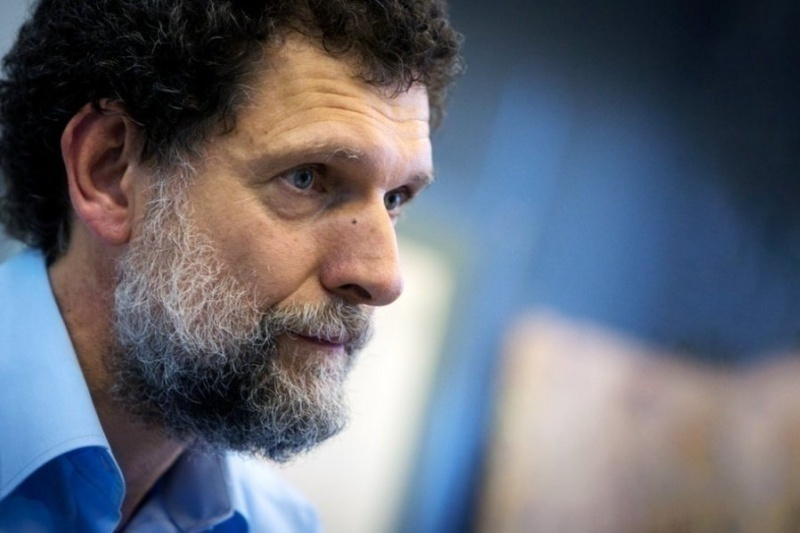 On October 18, 2017, Osman Kavala was taken into provisional detention at Istanbul airport while returning from the city of Antep in Turkey. A few days later, on Nov. 1, his arrest was confirmed on charges of "attempting to change the constitutional order and overthrow the government." Since then, Kavala's name has occupied the pages of newspapers, television screens and the daily lives of people in Turkey. Kavala is in prison today and was sentenced to life in prison last April. His case has become international and there are several initiatives in favor of his release.

But who is Osman Kavala?

He was born in 1957 in Paris. He attended American Robert High School in Istanbul and then graduated in economics from Middle East Polytechnic University, ODTU, in Ankara. He completed his studies at the University of Manchester with a master's degree, also in economics. The son of a wealthy family, Osman Kavala returned to Turkey in 1982 after the death of his father.
A year later, in 1983, he founded the Iletisim publishing house and in 1985 participated in the founding of two others, Ana and Aras. These are the first small businesses for Kavala that confirm his idea of doing business in the world of culture. Iletisim, over time, has become a point of reference for many left- leaning journalists, essayists, novelists, and university professors.
In the following years, Kavala gained more visibility through participation in numerous public initiatives and national and European projects for environmental protection and civil rights in Turkey. In the 1990s he collaborates with Amnesty International, the Goethe-Institut, the Swedish Consulate and the French Cultural Center. Kavala is also one of the founders of the Turkish branch of Open Society, the famous, celebrated and controversial foundation created by George Soros. Osman Kavala's name, during his detention, was mentioned in two particular cases. Sedat Peker, one of the most prominent members of the panturchist movement in the world of criminal organizations, claimed to have had a relationship with him that allegedly involved an exchange of favors, when he had a small software company. In 2021 Peker, in a video posted on YouTube, recounted how Kavala had approached him to solve some problems related to his debts. Entrepreneur Turgut Büyükdağ also mentioned this in a 2008 trial and Alican Uludağ, a former intelligence executive, in an interview with the German news agency DW. This news obviously attracted public attention, as it would be an agreement between a "leftist" businessman and a mafia figure.
Another particular case involving Kavala is related to the phase of dialogue that took place from 2013 to 2015 between the state and Abdullah Ocalan, the historical leader of the armed PKK organization. In a series of articles published at the national daily Milliyet, authored by journalist Namik Durukan, the messages of solidarity and support that Kavala sent to Ocalan through former parliamentarian Sirri Sureyya Onder were discussed. Taking into consideration that Ocalan is sentenced to life in prison and has been in solitary confinement for more than twenty years, and that above all he is referred to as the "number one terrorist" in Turkey by most people, this news was not well received by society.

What is Kavala accused of?

For Turkey, this is one of many cases of extraordinary trials, which cannot be evaluated based on laws, and cannot fit into the concept of "justice." Kavala's case is not the only one: there are numerous similar trials related to the failure to recognize fundamental rights and justice. These trials have become everyday practices contrary to universal legal norms, existing laws and established judicial procedures. The story of Osman Kavala's detention has a very special place in the recent judicial turmoil and rights violations. It is a very special event in which the politicization of the judiciary and its transformation into an instrument of revenge is realized.
It is an example of the effort to create an offense against a person, an example of when opinions and assumptions are deemed sufficient for an accusation, while it is not even necessary to provide evidence. It is an example of disregard for rights, legal norms, and even simple rules of logic. Osman Kavala was imprisoned for months without knowing what he was accused of. Exactly as happened to journalist Deniz Yucel during his year of solitary confinement. Then, the indictments turned into documents to support Kavala's detention without interruption. As the unfounded charges, for which no concrete evidence was presented, collapsed one by one, the judiciary produced absurd new charges. Kavala was charged under Article 312 of the Turkish Penal Code and absolved. The charge was that of "being the financier and manager of the Gezi protests." However, official state documents stated that these protests could not have been "run by a single center." In any case for Kavala this opinion was not considered valid. The other charge, namely that of "coup organization" based on Article 309, failed, and the panel of judges decided to discharge Kavala twice, without success. When there was no card left to charge him, the charge of "espionage" under Article 328 was brought.
The result of the trials, which continue without showing any concrete evidence inherent in almost any article of the Turkish Penal Code, is that Kavala has been deprived of his freedom and his family's affection for years.
Persistent lawlessness and all the irrational coercion have been incorporated into the Gezi maxi-trial, which has been reopened and turned into a multitude of trials.

In Turkey, media that pander to the central government's position are referred to as "biased media" or "sewer media." Most of them belong to a series of businessmen who operate mainly in the construction, infrastructure and energy sectors. The owners are in love with the political and economic design that has been ruining Turkey for 20 years. They have become rich, or were actually born rich, in recent years. They bought at auction several TV, radio or newspaper channels because the state confiscated them from their previous owners. Especially the newspapers of this tradition live off the fact that some state banks are forced, literally, to invest in them to advertise their services. Thus, these media are in the total service of Ankara and only do propaganda. Even in the case of Kavala.
Takvim: "His goal was to overthrow the government and create a series of acts of vandalism with Gezi." Sabah: "Gezi's mentor is Kavala." AHaber: "Here are the accusations aimed at Soros' sons." Yeni Safak: "Kavala is the main financier of terrorists."
These are just a few headlines from some of the major national newspapers and TV channels. It is easy to imagine how the most aggressive, fundamentalist and nationalist local media have talked about the Kavala trial. These are headlines and launches that one hundred percent go along with the government's statements. In almost exactly the same words, the President of the Republic, the various parliamentarians of the government coalition, and the ministers of the Republic of Turkey have spoken about the Kavala case and the Gezi maxi trial in recent years.

In Turkey, regarding the Kavala trial, numerous foundations, universities, associations, opposition parties, trade unions and intellectuals have spoken out in solidarity. In addition to this local reaction, there have been several gestures of solidarity abroad as well. In December 2019, the European Court of Human Rights (ECHR) asked Ankara for Kavala's immediate release, calling his trial contrary to Articles 5.1, 5.4 and 18 of the Convention. Despite this, a few days later, the panel of judges decided to reaffirm Kavala's detention. On September 3, 2020, the Council of Europe's Committee of Ministers called on Ankara to respect the ECHR decision. As no reaction in line with the recommendations came from Turkey in the meantime, the same Committee decided in June 2021 to take the path of sanctions against Ankara. Finally, in May 2022, after the verdict of the local court, the European Parliament called this decision the end of relations with Turkey regarding its membership in the Union. In addition to institutional realities, nongovernmental organizations such as International Commission of Jurists (ICJ), Human Rights Watch and Turkey Human Rights Litigation Support Project have also expressed their opinion for Kavala's release from prison on several occasions.

Why is he a political prisoner?

After the political games in Ankara, the question that arises is this in fact. How did such a thing happen? Why specifically to Kavala? Numerous people have tried to find the answer to this question over the years, both people close to the government and those next to Osman Kavala. There is not just one answer, but several. Kavala is a wealthy businessman and is in favor of freedom of expression. He is a well-known face who also has economic power. He did not hesitate to support academic or practical projects that focused on defending the rights of those people who have been marginalized by central government policies over the past two decades: language "minorities," independent journalists, women victims of male violence, lgbtqi people, and nongovernmental associations.
Kavala also made his resources available to those municipalities that found themselves deprived of their mayors during the state of emergency from 2016 to 2018 because they were suspended and arrested. Extraordinary commissioners were appointed in their place, and these commissioners decided to close houses of refuge, women's associations, and cultural venues in the cities.
Kavala with his own money tried to revive all this. Kavala has an international network; he is a symbol of Turkey's civil society trying to go outside its borders and collaborate with civil societies in other countries. Whereas instead the regime in Turkey always tries to close the borders, create an open-air prison and rule the country with the policies of paranoia related to national security. So everything that comes from abroad, if it is not promoted by the government, represents danger and threat.
Finally, the Gezi uprising is a government wound that has not healed so it was necessary to bring this experience back to attention. It was a big popular uprising, millions of people took to the streets in 2013 in different parts of Turkey to rebel against all the evils that this government represents: censorship, fundamentalism, discrimination, injustice, looting, racism, and sexism. A collective action that challenged everything and said "the king is naked" before the eyes of the whole world. An uprising of self-government that showed that civil society does not need this Mafia political and economic design. The government's reactions during the uprising were of only one kind: violence. This is therefore a huge failure for the government, in every sense of the word. At the forefront of rebelling against the government were the women in fact in the Gezi maxi trial, reopened in 2017, three years after the uprising, there were numerous women in the courtroom and two of them were sentenced to 18 years in jail. Ankara still wants to keep alive the memory of Gezi but not the uprising of the people, it wants to keep the memory of its version. According to Ankara it was a kind of coup d'état, an action of looting and vandalism organized by foreign countries and with money from foreign ngos. Perhaps Osman Kavala was the ideal "leader" who "conceived, financed and led the Gezi uprising."

Such a fearful government that knows how to govern only by fear is committing suicide, leading the whole country to ruin. And Osman Kavala's trial is one of the tools Ankara uses to save/suicide itself.