Voices from the Laogai 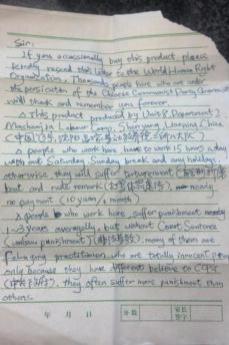 The text of the letter (picture by the New York Times)

"If you occasionally buy this product, please kindly resend this letter to the World Human Right Organization. Thousands people here who are under the persicution of the Chinese Communist Party Government will thank and remember you forever. The people working here must toil 15 hours a day without Saturdays, Sundays or holidays. Instead, they bear torture, beatings and severe insults. Nearly without a reward (10 yuan a month is nearly a dollar, editor’s note). The people who work here usually serve a term from 1 to 3 years, but without a court proceeding (it is an illegal punishment). Many of them belong to movement Falun Gong, and they are totally innocent, they are here only because their opinion differs from the one of the CCPG. And punishments against them are often the cruellest ones".

This is the text of the note that Julie Keith, an Oregon resident, found some months ago as she opened a box of Halloween decorations. Without knowing the identity of the message’s author, the woman sent it to the Federal agency for immigration and the news immediately spread amongt the organizations dealing with human rights. "The conditins described in the letter – said Sophie Richardson, director of Human Rights Watch China – are consistent with what we know about the country’s labour camps.

During an interview about the system of the Chinese laogais, a former prisoner said he is the author of the message found by Julie. He wrote 20 over 2 years and put them into the packaging of the products for the Western market. "For a long time I have imagined that someone would find my letters in America – said Zhang – a nickname he picked out of fear of reprisals – but over time I lost hope and I forgot about it ".

Zhang wrote his message after stealing pens and paper whilst cleaning the prison offices. He worked while his fellow inmates were sleeping out of fear of the delators, and he hid the letters in the structure of his bed in the hope the right moment would come to put them into the products destined to the Western market. Zhang’s testimony is not the only testimony about the system of labour and rieducation camps  in China.
Encouraged by the opening, some months ago, of the public discussion about this topic in the country, several former prisoners told about their terrible story. Their tales have described life in the laogai among abuse, beatings, sleep privation, torture and inhumane work conditions.  The Masanjia camp in North-East China produces uniforms for the national Police, but also Christmas garlands for North Korea,  I“made in Italy” goose-downs and silk flowers for the United States. The Chinese system has 300 such camps.