the Belarusian dissident risks up to 15 years 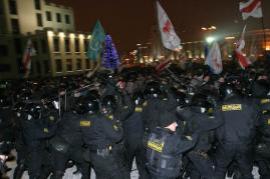 Srart of the trial against Andrei Sannikov one of the candidates who challenged Lukashenko at the presidential ballots of past December. The man, who had been jailed with thousands others after the farce vote, is accused of "mass disturbances" allegedely carried out by inciting people to take to the streets against the regime. He risks up to 15 years jail.

The regime of Lukashenko, who's on power since 1994, follows the footprints of the former USSR. In fact the Country's secret police is still called KGB and tries to prevent dissidents even from keeping closest family ties. Sannikov had been jailed with his wife Irina Khalip, a coworker of Novaya Gazeta, and the regime had tried to strip them off the custody of their three years old son. Then his wife was put to house arrest with the child, but at the moment it is strictly forbidden to her to talk to the dissident still in prison.

Sannikov's closest aide, Dmitry Bondarenko, was sentenced to two years some months ago over "violating the public order". In his final statement he compared the virdict to "a reprisal against political opponents". According to the opposition 80% of votes at the recent elections were fraudulent. International monitors said election mechanisms were "flawed".