The state of press freedom in China 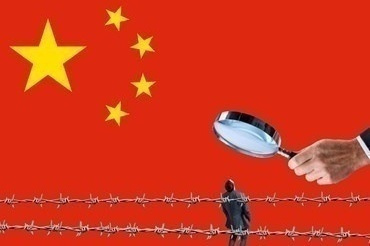 "The People's Republic of China is the world's largest prison for journalists, and its regime conducts a campaign of repression against journalism and the right to information globally": is Reporters Sans Frontières' (RSF) unforgiving opinion of the state of press freedom in China. A right recognized by Article 35 of the Chinese Constitution, but very limited a few lines below with reference to the need to restrict its exercise to protect "national sovereignty" and the "public interest." In China, freedom of the press also takes on "Chinese characteristics."

Ever since the founding of the People's Republic in 1949, the term "freedom of the press" (xinwen ziyou 新闻自由) has often been attacked and branded as "a bourgeois fantasy of the West" and a tool to defame China. According to China Media Project, the expression appears only rarely in state media, where it is more frequently replaced by the variant "freedom of expression" (yanlun ziyou 言论自由). In 2005, the People's Daily, the megaphone of the Communist Party, explained the "essence of press freedom" by attributing to it the triple task of "fostering economic development, social stability and improving people's living standards." The media - the newspaper concluded - must "provide strong ideological assurance and public support for the great cause of the building of socialism with Chinese characteristics." To this view of "freedom of expression," the People's Daily contrasts "so-called freedom of the press" (suowei de xinwenziyou 所谓的新闻自由), a term that from the Tian'anmen Square protests onward has been used by government propaganda to debase the democratic claims of liberal Chinese exponents.

Xi Jinping's arrival at the head of the party in 2012 coincided with a total closure to externally imported ideals and values. Freedom of the press makes no exception. In recent years, the term xinwen ziyou, once considered "sensitive," has become taboo. An internal notice published in 2013 by the party's central committee- the famous "Document 9" included "the Western idea of journalism" among the "seven subversive currents" along with the promotion of constitutional democracy, the universal value of human rights, participation in social life, neo-liberalism, historical nihilism, and the questioning of "socialism with Chinese characteristics."

According to a recent RSF report, this is a real "big jump backward for journalism in China." The Paris-based organization underlines how mandatory political training is now required for the practice of the profession, which includes the study of "Xi Jinping thought," the president's theoretical contribution incorporated into the Chinese constitution.

With Xi, therefore, the ideology archived after the 1980s economic reforms began to prevail again. With the result that loyalty to the Party/state wins over professional ethics.

Anyone who crosses the line is at great risk. "The simple act of investigating a 'sensitive' topic or publishing censored information can result in years of detention in unsanitary prisons, where mistreatment can lead to death," advises the report, which as of December 2021 counted "at least 127 journalists (professional and non-professional) detained by the regime." The limitations have not spared foreign reporters either. In its latest survey, the Foreign Correspondents' Club in China (FCCC) expressed concern about the "dizzying speed with which media freedom is declining in China." Of the more than 100 foreign journalists interviewed, 99% said working conditions do not meet international standards.

Nearly half of the interviewees complained of staff shortages due to delays in visa approval. Serious limitations in the exercise - exacerbated by anti-Covid measures - make it increasingly difficult to tell the country with thoroughness.

Especially in the most sensitive areas: 88% of respondents who traveled to the Xinjiang Autonomous Region in 2021 (where serious abuses against ethnic minorities are suspected) said they were monitored and followed throughout their permanence.

Once a virtuous example, Hong Kong, the former British colony returned to mainland China in 1997 with the promise of broad autonomy, is no longer an exception either.

Although the local mini constitution recognizes "freedom of speech, press and publication," since July 2020 a controversial National Security Law has allowed the government to mute uncomfortable voices in the name of fighting "terrorism," "secession," "subversion" and "collusion with foreign forces." In 2021, two major independent newspapers, the Apple Daily and Stand News, were shut down while several media companies ended operations claiming legal risks. In just two years, Hong Kong ceased to be considered a window into Communist China.

In just two years, Hong Kong ceased to be considered a window into Communist China.

In July, during Xi's visit for the 25th anniversary handover celebrations, at least ten international media companies were excluded from major events under the pretext of Covid.

As a result that special administrative region was demoted in RSF's ranking dedicated to press freedom: this year Hong Kong ranked 148th out of 180 countries, between the Philippines and Turkey. A vertical drop from the 80th position in 2021 year, though still better than the People's Republic, ranked 175th.

The only virtuous example in the Sino-speaking area remains Taiwan. Climbing five positions, in one year the democratic island came to 40th position. The former Formosa is among the 40 countries where the journalistic environment is still to be considered "satisfactory."

Despite the superficially good performance, the NGO's judgment, however, is not fully positive. Indeed, many problems remain to be resolved, such as growing "political polarization, unspoken publicity, sensationalism and profit-seeking." Distortions that, according to RSF, prevent citizens from accessing objective information and hinder the work of journalists, already tested by working conditions described as "toxic": low salaries and exhausting rotations are driving young people away from the profession.